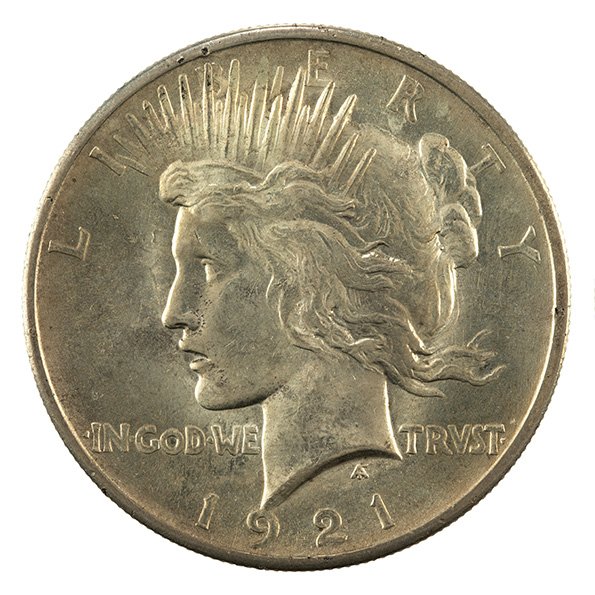 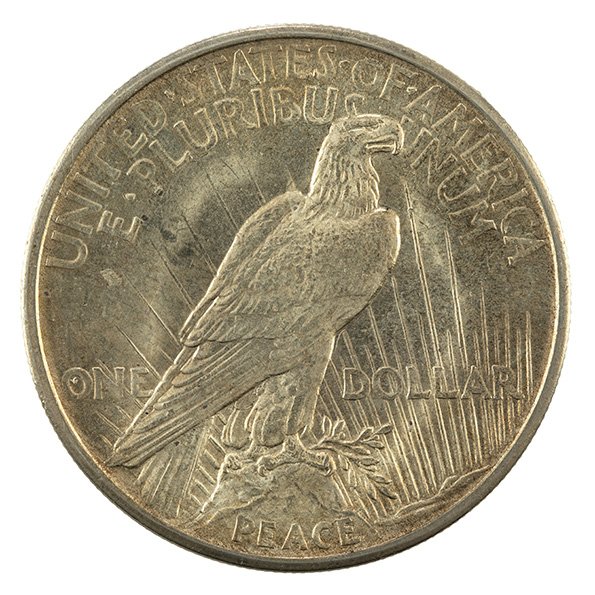 The Silver Peace Dollar was struck briefly and intermittently between 1921 and 1935; it was a gesture of goodwill after the end of WWI, the War to End All Wars.

The Peace Silver Dollar was a silver coin produced and distributed briefly by the United States Mint. Despite the fact that Congress failed to pass a bill for a new coin commemorating the end of the first World War, a movement, led by the US Commission of Fine Arts, quickly built momentum and resulted in the debut of the Peace Dollar. The nation sacrificed a great deal to stem the tide of worldwide aggression. The coin provided a hopeful goodwill gesture for the county to commemorate the end of the war to end all wars. For the most part, the value of the coins result from the amount of silver used to create them. Uncirculated coins, as well as those in pristine condition, can demand high premiums. The Peace Dollar series does contain some key dates, namely 1921, 1927, and 1928. The production of the Peace Silver Dollars stopped as soon as quotas were met as stipulated in the Pittman Act. There was a brief resurrection in 1934 before the series was retired completely.

There is no series in United States Coins that can match the history and excitement of the Silver Dollars. From the early gambling days of Las Vegas, more collectors have been hoarding, collecting, investing or just admiring the charm of what a silver dollar brings to the table. It has appeal, it has size, and it has enough weight that when you hold it in your hands, you know you have something substantial.

The Silver Peace Dollars are undervalued coins and represent an opportunity for collectors to assemble a full set relatively inexpensively. They are also an important part of early 20th Century American history.

History of the Silver Peace Dollar

2018 marked the one-hundredth anniversary of World War I. It was the end of the largest and bloodiest conflict the world had ever seen up to that point; it is considered a turning point in human history. It was the end of 4 massive empires, the rise of Soviet Communism, and the entry of the United States into global power politics.

The most significant intellectual legacy World War I left to us was the end of the idea that progress would inevitably solve any problem. In 1914, just before the war erupted, people lived through a world similar to the world we live in now. A world defined by economic growth, technological revolutions, and increasing globalization. It was widely believed then that when ugly trend lines appeared, they were temporary and would be overwhelmed by the steady march of progress. World War I dashed that idea into a million pieces.

During the war, the German government strove to destabilize the British economy by spreading rumors that the British were unable to redeem all of the paper currency for silver. These rumors, together with the hoarding of silver, caused the price of silver to rise artificially and risked damaging the British war effort. To combat this situation, the US sold the precious metal to the British government up to 350,000,000 silver dollars at $1 per ounce of silver plus the value of the copper in the coins. About 47% of all Morgan Silver Dollars were melted for sale to the British. The Treasury was required by the terms of the Pittman Act to strike new silver dollars to replace the coins that had been melted and sold to England. The law also stipulated that the silver had to be purchased from American mining companies.

After prices settled from postwar highs, the Mint dusted off the old dies for Morgan Dollars and zealously struck 86 million specimens and sent them into circulation. This was the single largest mintage of the entire series. Coincidentally, the same day production resumed on the Morgan Dollar of 1921, Congress ignored the proposed bill for a new silver dollar commemorating the postwar peace.

As it turned out, Congressional approval was not needed for the Silver Peace Dollar replacement since the Morgan Dollar had been produced for over the 25 years minimum requirement. Numismatists and artists lobbied the Mint to issue a coin that memorialized the peace following World War I. By the end of the year, the Treasury Secretary Andrew Mellon approved the Peace Silver Dollar.

Late in 1921, the Commission of the Fine Arts held a competition for the design of the new silver dollar and invited 8 prominent sculptors to participate. Several of the entrants had already successfully designed US coins and had already achieved considerable fame. They included Fraser (Buffalo Nickel), MacNeil (Standing Liberty Quarter), and Weinman (Walking Liberty Half Dollar). Although the youngest participant and a novice coin designer, De Francisci, who had actually studied with all of them, won the competition and took home the $1,500 cash prize. By December, the design of Anthony De Francisci was used to strike 1,006,473 coins.

The obverse featuring Miss Liberty facing to the left, her features strikingly similar to those on the Saint-Gaudens $10 piece of 1907, but said by the artist to have been inspired by his wife Teresa Cafarelli who sat modeling for him sitting by the kitchen window. The reverse depicted an eagle perched upon an olive branch (note: with no arrows this time). The word PEACE inscribed below. Above the right-facing eagle are words arranged in a manner loosely based on the lettering and rays used on the illustrious 1907 Double Eagle…perhaps another nod to the master Saint-Gaudens.

The whole supply went into production and not even one Mint-sealed bag of 1,000 coins was known. The Peace Dollar motifs were revised to a shallow relief for the 1922 pressings and beyond. The series was created in huge quantities and saturated the market. It was as if such a message of peace might keep the tragedy of a world at war from ever happening again. Four years after the last Peace Dollar was created, the world went to war again.

Peace Silver Dollars, like its predecessor the Morgan Dollars, vary widely and should be cherry-picked for rarity and condition. Investment buying is particularly strong for Peace and Morgan dollars in higher grades. Matte-style proofs were made of Peace Dollars in their time, but finding one can be elusive. PCGS and NGC report that only 6 proof-like specimens have been graded.

Some Silver Peace Dollars were fabricated to deceive collectors into believing they are proof-like, so be careful. As with most precious metals products, be extremely careful about buying online or for unrated dealers. If something seems too good to be true, it probably is! Midas Gold Group is a trusted dealer accredited with the Better Business Bureau (BBB), the Industry Council for Tangible Assets (ICTA), and an authorized direct distributor for the US Government and the US Mint. You can always trust Midas Gold Group for genuine products and reliable guidance.