The Somalia Elephant Gold coin is struck by the Bavarian State mint in Munich, Germany for the government of Somalia in .999 fine gold with a unique elegant design.

Perhaps no other coin series of late has piqued the interest of numismatics quite as readily as the African Wildlife Series from the Bavarian State Mint. A new 2020 edition, the 1 oz Gold Somalia African Elephant, certainly shows no signs of bucking the trend.

This gold coin is .999% pure, with an elegant design and a face value of 1,000 shillings. Struck at the Bavarian State Mint in Germany, the Gold African Elephant coin has proven to be one of the most galvanizing offerings in the African Wildlife Coin Series. The coin came into existence in 2008, prompted by the immense popularity of the Silver Elephant before it.

As a paean to the rugged beauty of the African savanna, the Gold African Elephant coin portrays one of the largest mammals found on its plains: the elephant. The design on the obverse depicting two leopards, a shield and a five-pointed star has remained a constant since the coin’s release. A draped ribbon over crossed lances and palm fronds rounds out the image. The reverse of the Gold Elephant Coin changes annually but consistently features a subtly varying illustration of the majestic titular mammal in its natural habitat.

Although referred to as an African wildlife “series”, it would behoove us to note here that the elephant is so far the only animal to make the cut. When you take a look at one of these beautiful coins you will understand why: the regal, iconic quadruped is the perfect match for this elegant currency.

The series first gained traction with investors between 1999 and 2003, when the Mint released a coin that’s nearly indistinguishable from today’s Somalian Elephant edition. The only substantive difference was that Zambia was the state of issue. When the Somalian coat of arms first appeared in 2004 on the Silver Elephant coin, its popularity quite naturally precipitated the introduction of the Gold Somalia Elephant in 2008. These truly wonderfully designed coins have demonstrated themselves a dependable collector’s item ever since.

One of the most noteworthy and historical aspects of the Gold Somalia African Elephant coin is the location of its production: the Das Bayerisches Hauptmünzamt Mint, otherwise known as the Bavarian State Mint. This mint is over 800 years old and has been producing coins since the year 1158, making it the oldest company in Munich. One of only five German state mints, the Bavarian State Mint produces top-quality collector coins, medals, and seals.

As always, The Midas Gold Group is more than happy to counsel prospective buyers on whether this incredible Gold African Elephant coin is right for your collection. And remember, any coin bought from us will always come to you in immaculate condition straight from the mint itself. 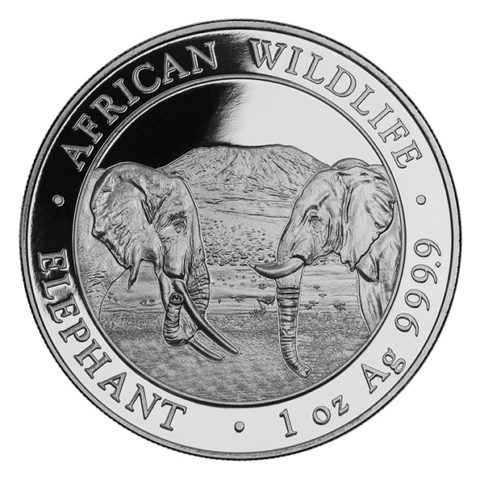 The .999 fine silver Somalia Silver Elephant coin is rich in history and design; it is struck in Germany by the Bavarian State Mint for the Government of Somalia.