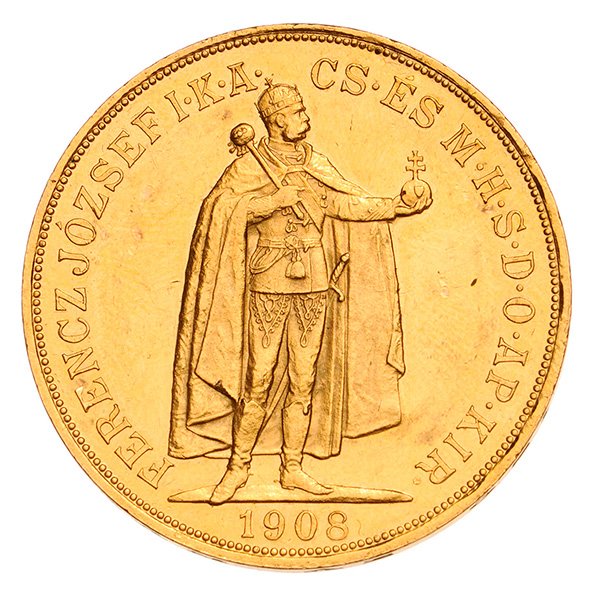 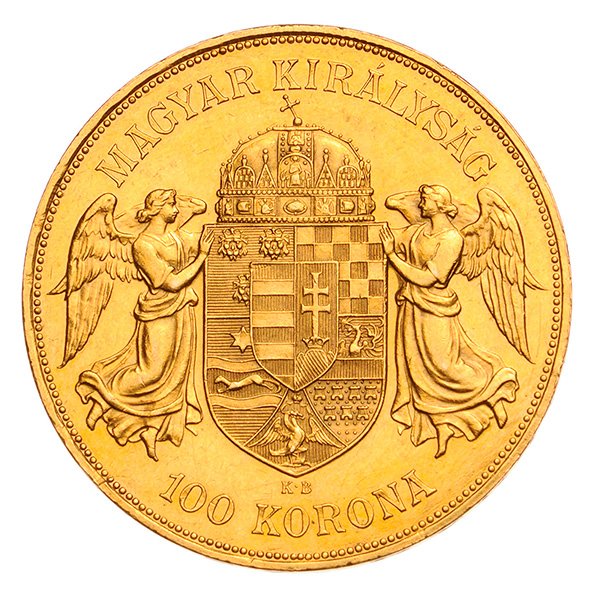 100 Korona Gold Coins seen today are restrikes of a coin produced in the 19th and early 20th century; not to be mistaken as rare coin, but a popular bullion product.

The Gold Hungarian 100 Korona represents one of the best opportunities on the market for bullion collectors seeking inexpensive gold coins they can buy with confidence.

The Korona was one of Austria’s final mintings before the country’s bitter engagement in the First World War. The coin commemorates the Austrian Emperor Franz Joseph I, whose reign would come to an unfortunate end not long thereafter.

About the Gold Hungarian 100 Korona

The modern Gold Hungarian 100 Korona is a re-strike of the 1915 minting. Finding an original from that year or before is very unusual. Each bullion coin contains 0.9802 ounces of gold, at 21.6 karats.

The obverse side depicts the Emperor Franz Joseph I holding a regal spear, while the reverse displays the official seal of Austro-Hungarian Empire and the Habsburg Dynasty.

Gold 100 Koronas are no longer produced by the Austrian Mint, nor are they advertised or promoted. In part because of this, they rank among the lowest-premium gold bullion products currently on the market.

Note: The 100 Koronas are not to be confused with the 100 Coronas, which are the exact same weight and purity but differ in their design. On the obverse side of the Corona, the emperor is featured in profile rather than holding a spear in the wider view seen in the case of the Korona. Also, the Corona is much more commonly found on the bullion market than the Korona.

While many wise investors chose the Gold Hungarian 100 Korona as well know way to own low-premium gold, we advise you to be careful when purchasing this coins from some other dealers. We have seen that certain companies market and sell coins such as the Gold Hungarian 100 Korona, most of which are modern restrikes, as rare collectible coins with a certain collectable value. They also claim that these rare coins will be exempt from a gold confiscation. These are false claims, when selling these coins, you will find that they are not rare and no buyer will pay a collector premium for these now modern-minted coins.

As always, Midas Gold Group is more than happy to advise prospective buyers on whether this coin is right for your collection. Any coin bought from us will always come to you in immaculate condition straight from the mint itself.