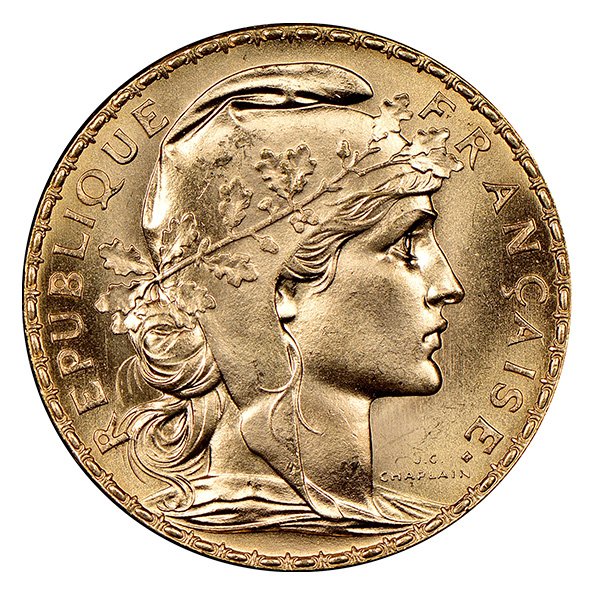 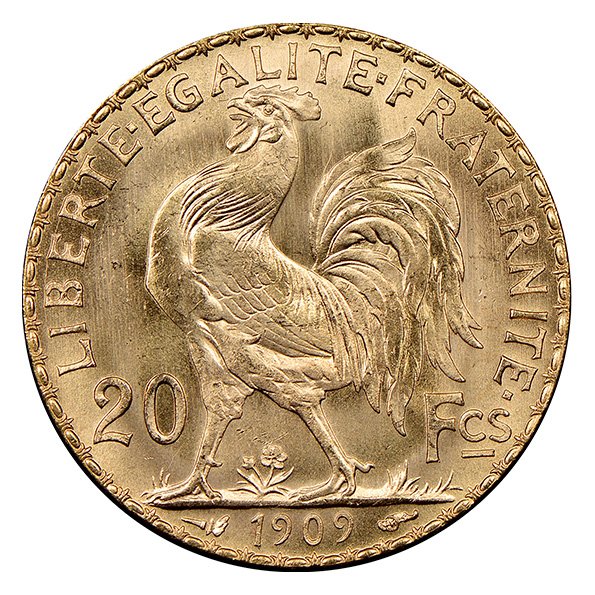 The last Gold French Rooster 20 Franc was minted in 1915, making it a highly collectible piece of history — and yet these gold bullion coins also quite affordable.

Also, despite their age and standing as a popularly traded pressing, one remarkable thing about the Roosters is their usually pristine quality: During the era of the gold standard, the coins were held bank as bank reserves, keeping them out of circulation for a long stretch and maintaining their mint condition for an unusually protracted period.

The gold content of each bullion coin is 0.1867 troy ounce. The obverse features Cérès, the Roman deity of agriculture, fertility and all things maternal. The goddess Cérès also symbolizes the third French Republic. The inscription République Française or French Republic graces this side of the Rooster.

The reverse side depicts Le Coq Galois or The Gallic rooster, another national symbol of the French Republic, although this one unofficial. A transcription reads: Liberté Egalité Fraternité or Liberty, Equality, Fraternity.

The Gold French Rooster was produced in prodigious quantities during its run, from 1898-1915, with an output of over 117 million bullion coins. Such a large number renders the 20 Franc gold coin remarkably affordable and hence quite attractive to bullion investors looking for a deal. On top of that, they’re safe — fully backed by the French government — since they’re legal currency, with a face value of twenty francs.

The coins are also conveniently small and easy to store. All in all, the French Rooster 20 Franc is an exceptional little coin.

As always, Midas Gold Group is more than happy to advise prospective buyers on whether this coin is right for your collection. Any coin bought from us will always come to you in the best possible condition.