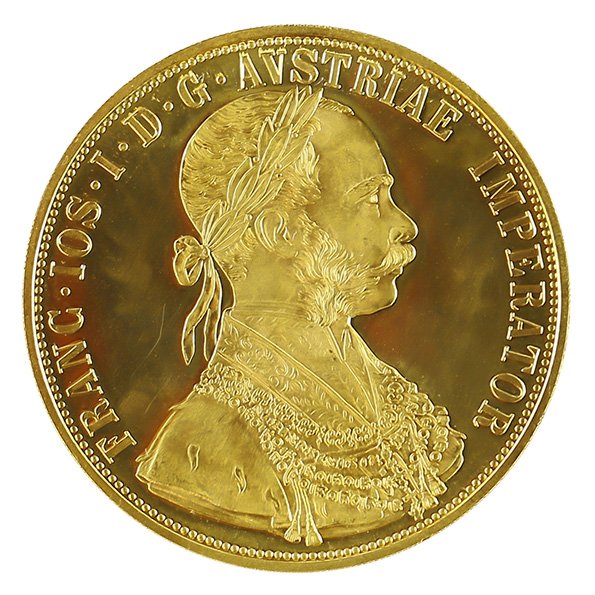 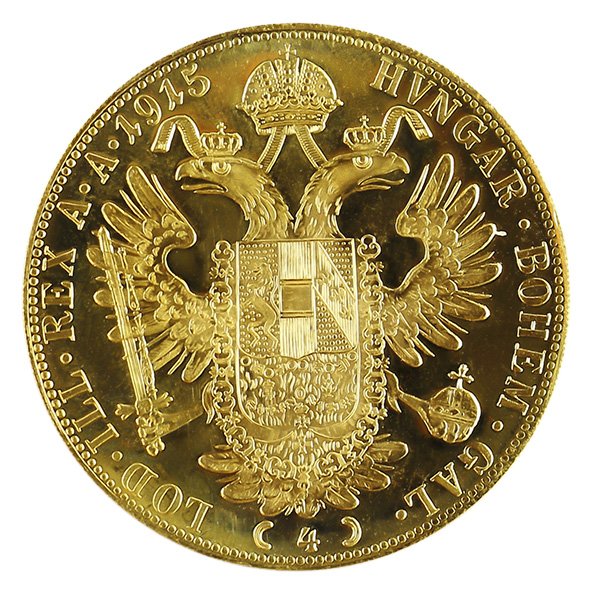 The Gold Ducat was a primary form of currency in the Austrian Empire of the 12th century. Today’s coins are restrikes from both the Dutch and Austrian mints.

First produced in the year 1140, the Gold Austrian-Dutch 4 Ducat comes with a rich imperial history attached, and has long piqued investor interest due to this historical importance, as well as the coin’s general stateliness and sustainability.

The word “ducat” derives from Medieval Latin. It means “relating to a duke or dukedom” and originally the coins were thought of as duke’s coins or “duchy’s” coins. The ducats were used in heavy circulation throughout Europe starting in medieval times until deep into the twentieth century.

The reverse of the Gold Austrian-Dutch 4 Ducat coin features the House of Habsburg’s regal coat of arms. The Habsburgs held the throne of the Holy Roman Empire from 1438 until 1918, with the exception of Charles VII’s brief reign beginning in 1742. The Habsburgs produced the kings of an impressive number of countries within the Empire during its reign, including in Bohemia, England, Germany, Spain, Italy, Croatia, Portugal, Holland, Ireland, and Hungary. Not a bad run.

The obverse reveals the double-headed or Imperial Eagle, a symbol of the Holy Roman Empire. Festooned atop the bird sits the Imperial Crown, which incidentally became the Austrian crown after the Empire’s dissolution. The eagle clutches the crown jewels, or the Imperial Regalia.

The modern edition of the Four Ducat Gold Coin is a re-strike of the 1915 version. Each coin offers a little less than half an ounce of pure gold.

Gold Austrian-Dutch 4 Ducats are beautiful coins, some of the most elegant and historically rich gold bullion products on the market.

As always, Midas Gold Group is more than happy to advise prospective buyers on whether this coin is right for your collection. Any coin bought from us will always come to you in excellent condition exactly as you would hope and expect.