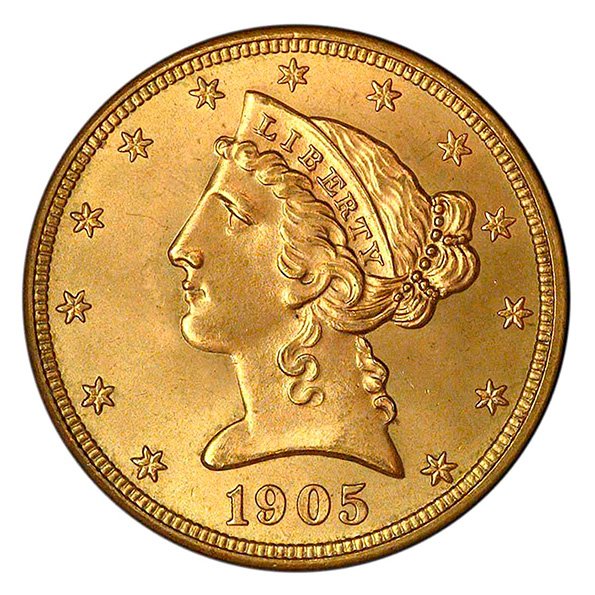 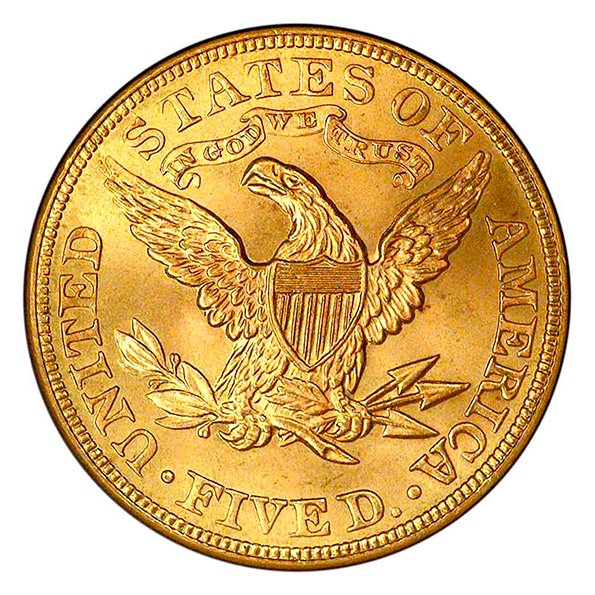 The $5 Liberty Half Eagle (or Coronet) has the distinction of being the only coin of a single design to be minted at 7 US Mints: Philadelphia, Dahlonega, Charlotte, New Orleans, San Francisco, Carson City, and Denver. For those struck in Philadelphia, its composition was 90% gold and 10% copper. The gold ore used at Charlotte and Dahlonega contained a high degree of natural silver content, which gave the coins a distinct “green gold” color. The Half Eagle design was used for nearly 70 years from 1839 to 1908. There was a modest change in 1866 when IN GOD WE TRUST was added. The “No Motto” Liberty Half Eagles before 1866 were widely used in commerce. There was little thought to preserving them for numismatic reasons. Although worn and low grades are available for many dates, gems are virtually unknown for the majority of varieties. Early date “With Motto” Half Eagles are scarce to incredibly rare especially in higher grades. After 1878, mint state coins of most varieties are more available.

History of the $5 Liberty Half Eagle Gold Piece

Aesthetics in 19th century art and design tend to lag behind modern trends and sensibilities. This is certainly true of the engravers at the US Mint and their prevailing taste for the look of American coinage. Christian Gobrecht was a well trained sculptor and engraver strongly influenced by Neoclassicism. His obverse design of the new Half Eagle featured Lady Liberty, her hair in a bun secured by a string of beads, wearing a coronet in her hair with the word LIBERTY inscribed across it. The bust is partially surrounded by the 13 stars representing the original 13 colonies, below is the date.

Gobrecht kept the eagle design almost exactly as it had been used in 1807 only adding a bit of fullness to the length and breadth of the wings.

The 1854-S is the most rare of the regular “No Motto” Liberty Half Eagles. Out of an original mintage of 268 from the San Francisco branch, only 3 specimens are known to exist today. Philadelphia Half Eagles from this period are the most commonly encountered. Mintages during the Civil War tended to be low and hoarding of coins were widespread.

Most of the “No Motto” Half Eagles seen on the market today are graded EF and AU. Higher grades are rarely seen and prohibitively expensive for most collectors and investors. Proofs of this series are true numismatic treasures. Mintages of Proof strikes after 1858 range from 25 to 80 pieces.

As an official gesture to comfort the nation after the Civil War, Congress passed the Act of March 3, 1865 which called for the motto IN GOD WE TRUST to appear on all coinage able to accommodate it.

Half Eagles were still made in small numbers after the debut of coins with the motto IN GOD WE TRUST. Most war time debts were being repaid with paper currency. Hard money payments resumed in 1878, and by 1880, the US Mints were making huge quantities. Between 1866 and 1908, more than 51,500,000 regular issue Liberty Half Eagles with the motto IN GOD WE TRUST were minted. Annual mintages of Proof strikes ranged from 20 to 50 pieces up to about 230 pieces in 1900.

Building a type set is always a good idea. Study the availability and cost of any coins desired. Liberty Head Half Eagles are pursued systematically by relatively few collectors, except for Charlotte, Carson City, and Denver Mint issues. Many rare Philadelphia, New Orleans, and San Francisco varieties are less expensive than their elusive nature might otherwise suggest. This is the only US denomination of which examples can be collected from each of the 8 different mints (including the West Point Mint, for certain commemorative $5 issues). 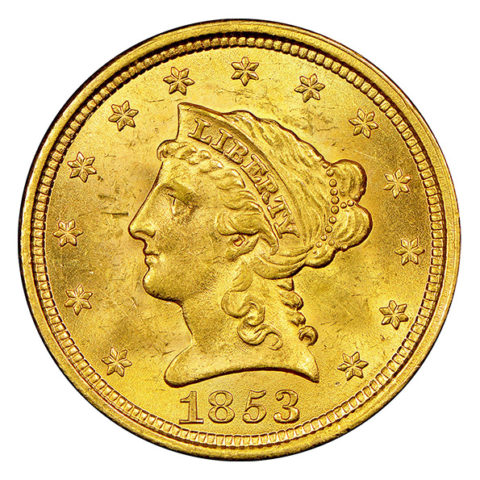 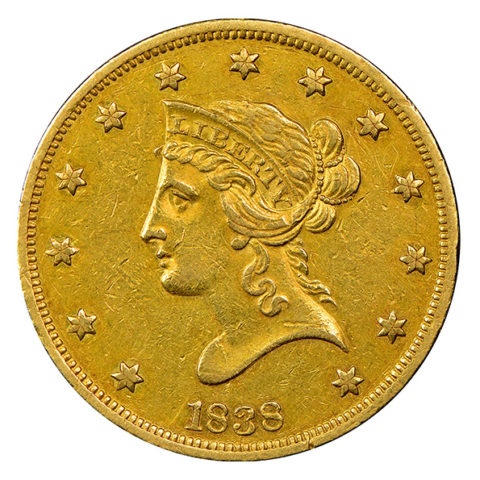 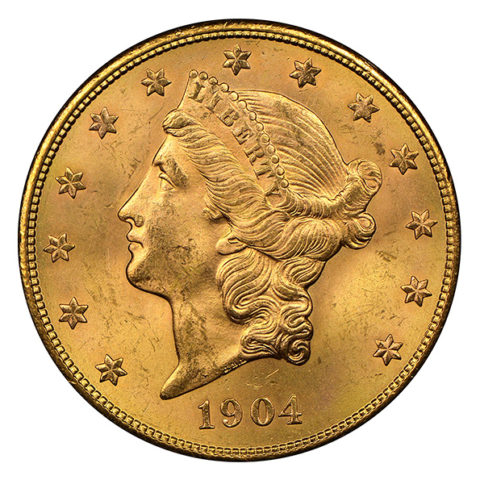