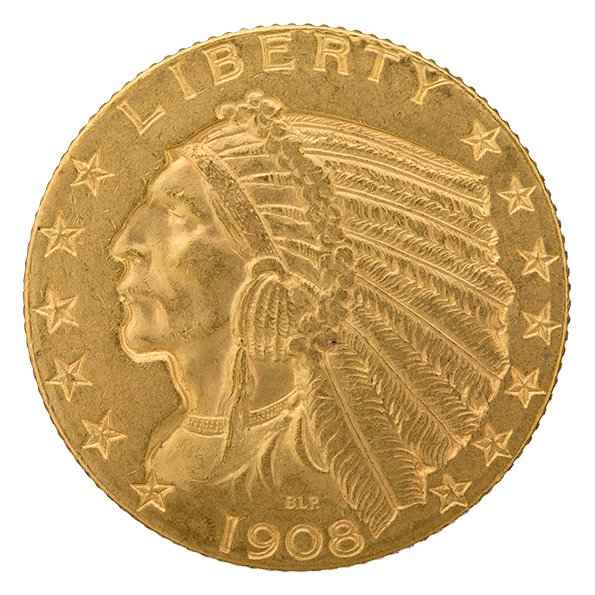 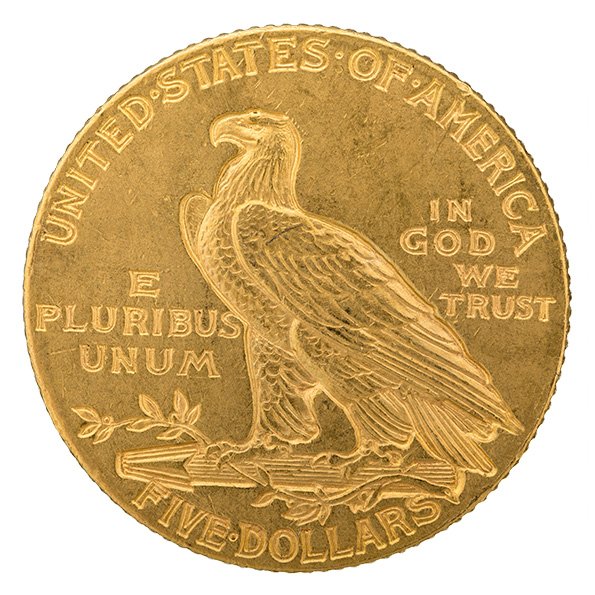 Of all denominations of the United States gold coins, half eagles were produced the most continuously. For a long period of time after the coinage of the $10 Eagle was halted in 1804 (not to resume until 1838), half eagles were made in large quantities and were important to commerce on a daily basis. US gold coins are so rarely seen today, it’s hard to realize that, from before the Revolutionary era to after World War I, they were common part of everyday life.

The $5 Half Eagle and $2.50 Half Eagle Indian Head coins, a favorite of collectors, came from the same swell of inspirational vision that created the country’s most innovative and striking coinage — namely, the Saint-Gaudens’ Double Eagle and Eagle Indian; indeed, the Indian Head Half Eagle and Quarter Eagle are the only 2 coins in US history struck with incuse designs. These design were actually etched into the surface and not raised above as it is on all over coins.

As a type, Indian Half Eagles are severely undervalued coins. Acquiring any issue will be a truly important acquisition to your collection or your rare coin portfolio. The first year of this remarkable coin is fairly abundant. The rest of the dates are scarce in mint state and gems are even more rare.

It is interesting to note that both the Half Eagle and Quarter Eagle Indian Head Coins designed by Bela Lyon Pratt are now the subject of a modern book by Allen Schein entitled The Gold Indians of Bela Lyon Pratt.

History of the $5 Indian Head Half Eagles Gold Piece

Imagine Charles Barber, the Chief Engraver of the US Mint, just having finished the arduous and painstaking task of striking the two coins designed by Saint-Gaudens — The Double Eagle and the Indian Head Eagle, both of which brought technical challenges to contemporary minting processes, and now faced with a completely new design, calling for a completely new way of minting, put forth by one of Saint-Gaudens’ students — Bela Lyon Pratt. By the end of 1907 the Mint had successfully launched the Indian Head Eagle and Double Eagle into circulation. The Mint could now turn its attention to the half Eagle and Quarter Eagle. They originally intended to simply copy the $20 Saint-Gaudens Double Eagle’s design. However, the Mint quickly found it virtually impossible to fit the required inscriptions onto these small gold coins. An art lover and personal friend of President Roosevelt, William Sturgis Bigelow, had recommended using a technique that he had seen used in Egyptian art. After some difficulty, the Mint was successful in this work, though Pratt was unhappy at the modifications made by Charles Barber.

Sioux Indian Chief Hollow Horn Ear modeled for the Bela Pratt’s design, but didn’t have the requested war head dress. The head dress had to be loaned from a third party.

After production of the new coins, William Sturgis Bigelow received a Half Eagle and a Quarter Eagle. He showed them to Pratt who wrote to his mother:

“They have knocked spots out of my design at the mint. They let their die cutter spoil it, which he did most thoroughly…but they tried to retouch it and gee! They made a mess of it. With a few deft strokes the butcher or blacksmith (Barber) who is at the of things over there, changed it from a thing I was proud of to one of which I’m ashamed.”

Because of the coins radical departure from what had been done before, the Half Eagle Indian quickly slipped into the realms of curiosity and esotericism. During its time being produced, the Indian Half Eagle was one with an extremely high face value. Back then, $5 had a significantly stronger purchasing power. Many people couldn’t afford to carry what amounted to a whole day’s worth of pay around with them. That much remains true today as the quantities of these coins on the market are diminishing with each passing year. 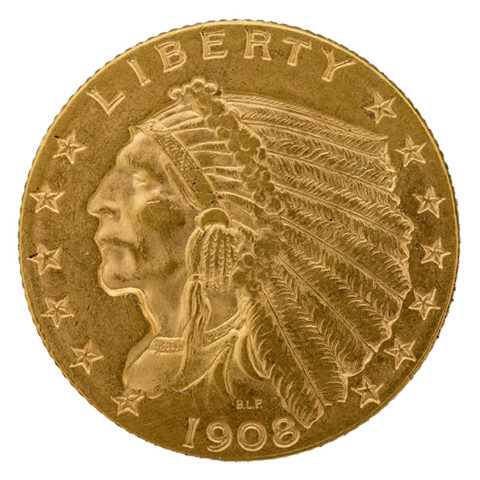 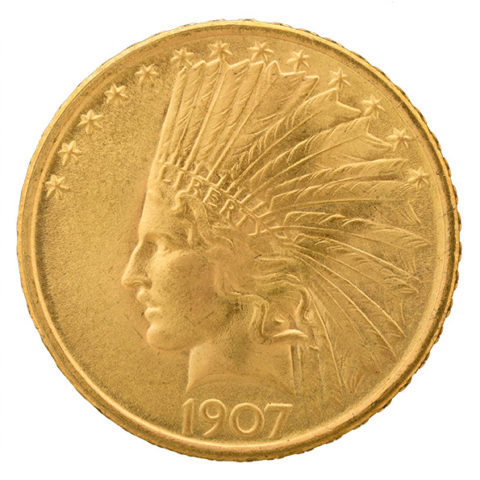 The $10 Indian Gold Coin is a gold coin produced by the US Mint between 1907 and 1933; the designer, Augustus Saint-Gaudens, featured a display of an Indian Chief.