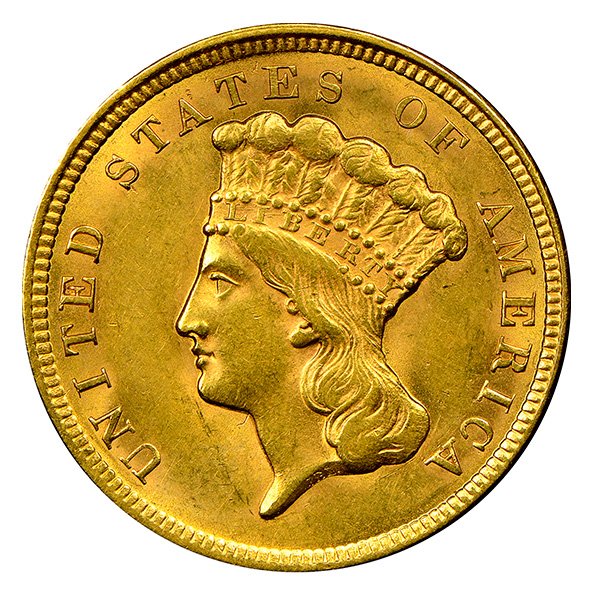 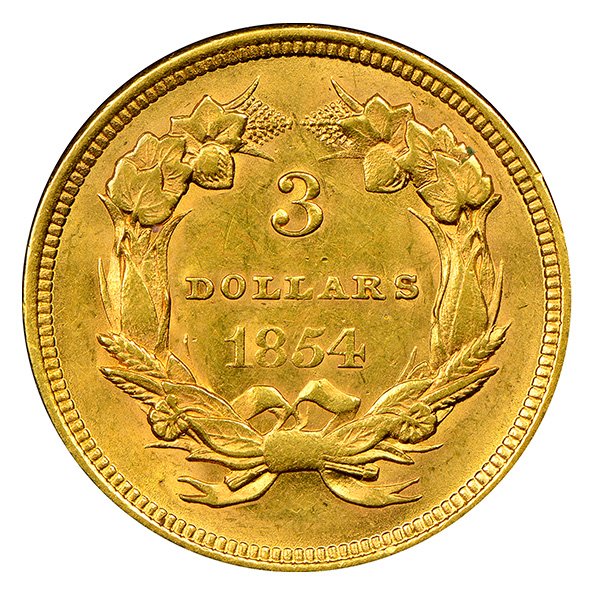 The $3 Gold Piece, an odd denomination, was produced from 1854 to 1889; while it was never exceedingly popular at the time, it is now highly coveted by collectors.

The three-dollar gold piece, an unusual denomination, was produced by the US Mint from 1854 till 1998 and was designed by the Mint’s Chief Engraver James B. Longacre. Although it never caught on throughout its 35 year circulation, it is now highly sought after by collectors. The later year issues are often highly proof-like. For some dates, gem Mint State specimens are notably more rare than the gem Proofs. The Proof coins throughout the series are exceedingly scarce.

Any logical reason for producing a $3 gold piece is hard to ascertain. Some argue that the silver three-cent coins could be bought in groups of 100 as could 3-cent postage stamps but this doesn’t seem like a strong case; in fact, the three-dollar gold coin never really caught on with the public. After the first several years, examples were not used much and did not circulate to any significant extent.

The $3 gold piece, authorized by Congress on February 21, 1853, made its debut in 1854. Chief Engraver James Barton Longacre chose as the subject of the obverse an Indian Princess. As it turned out, not a native American profile at all, but a profile modeled from the Greco-Roman Venus Accroupie statue that was on display at the Philadelphia Museum at the time. The design has the feature so characteristic of Longacre’s work, the distinctive sharp-nose maiden seen on his earlier gold dollar of 1849 and the Indian Head cent of 1859.

The coin’s reverse presents an abundant wreath of tobacco, wheat, corn and cotton. A plant at the top of the wreath design bears 2 conical seed masses perhaps symbolizing the country’s abundant natural resources. Both the agricultural wreath reverse and Indian maiden on the obverse seem uniquely American.

The basic design remained constant from the first year of issue to the last. Specimens were struck continuously during this span at the Philadelphia Mint. San Francisco minted the coin in 1855, 1856, 1860, and 1870. Of he 1870-S, 2 were struck and just one is known today. Other rare dates include the 1854-D, and 1875, which were struck only as Proofs.

The three-dollar gold pieces represent relics of an interesting but abortive experiment. $3 Gold Indian Princess coins are now among the most highly coveted of American gold coins due to their scarcity. New York dealer Norman Stack stated in 1950 that, All are rare. There is no such thing as a common three-dollar gold piece.