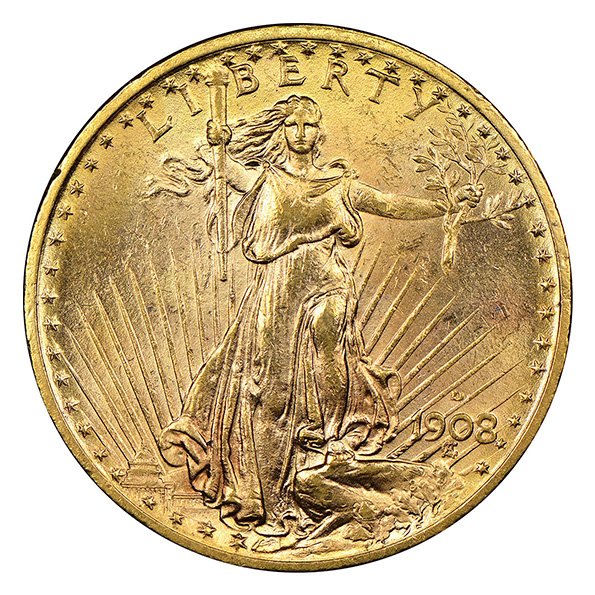 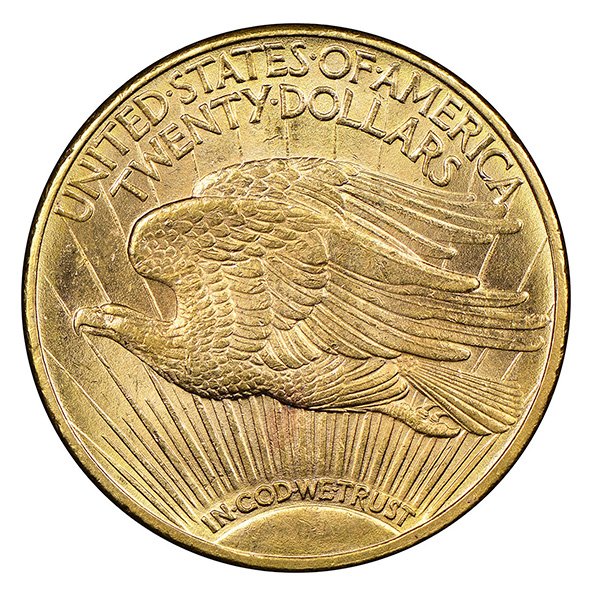 The Saint-Gaudens Double Eagle gold coin is a $20 gold piece struck by the United States Mint between 1907 and 1933; certain versions hold a numismatic value.

The Saint-Gaudens Double Eagle replaced the long-standing Longacre Liberty Head Double Eagle that carried the country through most of the 19th century. These highly sought-after coins are named after its eminent designer, the sculptor Augustus Saint-Gaudens who had become famous for the General Sherman Statue at the edge of Central Park in New York, the Robert Gould Shaw Memorial, and many others. It is considered by many to be the most beautiful of all US coins. It certainly has the most dramatic story behind its creation.

History of the Saint-Gaudens Double Eagle

Quite the numismatist himself, President Teddy Roosevelt thought American coinage to be artistically of atrocious hideousness. He had admired the ancient Greek coins and particularly the gold coins depicting Alexander the Great and always fantasized about “beautifying” American coinage.

In 1904, President Roosevelt proposed what he had in mind to Saint-Gaudens and offered him the job. Although the sculptor extraordinaire didn’t like the idea of working with the mint staff…particularly Charles E. Barber, he accepted the offer.

Saint-Gaudens’ attitude towards working with the staff at the mint stem from an unpleasant experience he had in 1892. He was asked to design the official commemorative half dollar for the World Columbian Exposition in Chicago. The obverse was basic. It showed Columbus coming ashore. It was his design for the reverse, however, that provoked attack. It featured a torch-bearing naked youth carrying wreaths to crown the victors. The exposition directors hastily withdrew the reverse design and replaced it with one submitted by Barber. Saint-Gaudens was insulted and vowed never to have anything more to do with the Mint or its employees.

The design Augustus Saint-Gaudens had created for the Double Eagle represents many first for the US Mint. In many ways, the high relief concept called for a striking process that was ahead of its time mechanically. The ideas represented in the design itself are also, in many ways, unique. It’s the first time, for example, the subject on the obverse of the coin is coming right at you. It is as if Lady Liberty is stepping off the very surface of the coin.

The obverse is truly one of the most iconic images of American coinage. Saint-Gaudens depicts Lady Liberty walking boldly forward, towards the bearer of the coin, out of the rays of a rising sun (or it could be a setting sun…it’s ambiguous). The torch held high in her right hand as if providing the nation with a guiding light, while the ever-present oak and olive branches are held in her left hand representing civic success and peaceful intentions. Surrounding Lady Liberty are 46 stars representing the states in the Union at the time the design was made. In 1912, the design added two additional starts to represent the new states: New Mexico and Arizona. The reverse of the coin depicts a bald eagle in flight its talons free from the olive branch and arrows it had carried in previous, and subsequent, designs.

From the beginning of the process to the days of production, there was conflict between Saint Gaudens and the old guard at the Mint, and while tensions increased between Saint-Gaudens and Barber, Roosevelt became more passionate as he too shared Saint-Gaudens vision of a sculpted design in high relief and with high rims to protect the design and allow for more uniformed stacking.

To the end, Charles Barber, who considered the concept impractical, fought the project at every turn and strove to have it aborted, but Roosevelt would have nothing of it. Saint-Gaudens, who had been also fighting colon cancer since 1900, finally succumbed to the disease. The orders came from the White House. They were clear, blunt and to the point. Begin the new issue even if it takes all day to strike one piece!

The first strikes by the Mint’s hydraulic presses were indeed ultra-high relief, each coin receiving 5 blows apiece. There were about 9 proofs which received 7 blows apiece. Some production strikes had wire rims while others were flat. About 11,250 had the date in Roman numerals just like Saint-Gaudens had wanted, but Barber’s persistent retaliation of the whole project prevailed and more and more began doing things the way he wanted. Switching all the Roman numerals to Arabic was the start. Mint officials were then ordered to start using the new dies modified for low relief pressings.

Saint-Gaudens Double Eagles were minted each year from 1907 through 1916. There was a 3-year pause, but then picked up again in 1920 and continued until 1933. Heavy melting, and not low mintages, resulted in many of the major rarities. In fact, the survival of many of the dates can be attributed to the Swiss and French banks that held them dormant in their vaults for so many years.

Many thousands of the European held Saint-Gaudens Double Eagles have made there way back home and are now in the hands of collectors and investors. Proofs are exceedingly rare as only 687 were offered for sale from 1908 and 1915.

The Saint-Gaudens Double Eagle is a testament to the artistry of one man, and the patron devoted to carrying that vision to completion. Modern minting techniques have finally caught up to the shared vision of Saint-Gaudens and Roosevelt and the production of even the high reliefs are now much more practical.

The Treasury paid homage to Saint-Gaudens by reviving his Double Eagle design for the 1986 American Eagle gold bullion coin program, where it has remained ever since.

The Midas Gold Group is proud to offer these gold American Eagles as sold investments and as part of our American legacy.