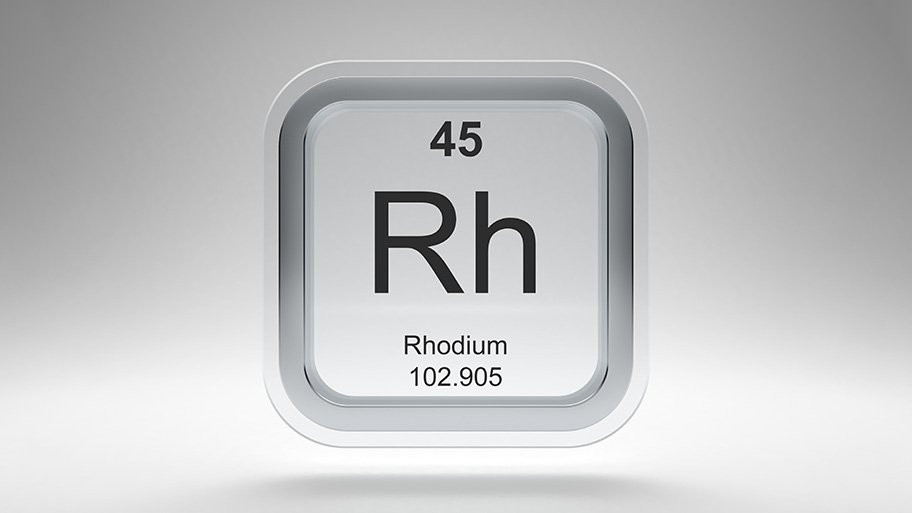 If you followed Midas Gold Group’s advice in March 2019, you would have realized a 290% gain in less than a year. On March 19th, 2019 the price of rhodium stood at roughly $3,000 per ounce. In our weekly blog article titled This Precious Metal is Already Up 35% in 2019! – Rhodium Shines we stated that the price of rhodium has tremendous room for growth. Those that followed this advice, have seen investments in rhodium nearly triple in less than a year!

We now have a new recommendation for owners of rhodium. Call us today; don’t miss the next tremendous opportunity.

Rhodium is one of the rarest elements and the most valuable metal in the world. It is approximately 100 times rarer than gold. It is a silvery-white, hard, corrosion-resistant, and chemically inert transition metal. It is typically found in platinum ores and extracted as a white inert metal that is difficult to fuse. 80% of rhodium is exported by South Africa followed by Russia. The primary use of rhodium is in three-way catalytic converters for automobiles. It is also used in jewelry, glass fiber production, electrodes for aircraft spark plugs, laboratory uses, nuclear reactors, mirrors, and headlight reflectors.

The recent price appreciation in rhodium has been spectacular. It has been a steep rise past the high set in 2008. In 2008, the price briefly rose above $10,000 per ounce. The economic slowdown of the 3rd quarter of 2008 pushed rhodium prices sharply back below $1,000 per ounce and to the ultimate low of $740 per ounce in 2015. The price of rhodium is highly variable. In 2007, rhodium cost approximately eight times more than gold and 450 times more than silver. Today rhodium is over six times the price of gold, 559 times more than silver, over ten times the price of platinum, and more than 4 times the cost of palladium. Recently rhodium topped an eleven-year high of over $11,000 per ounce. The most common investment-grade rhodium products include Baird bullion bars, PAMP rhodium bars, and the Rhodium Tuvalu South Sea Dragon coin, the world’s first and only legal tender rhodium coin. These products are very rare and thinly traded compared to gold, silver, platinum, and palladium.

The severe electricity crisis that South Africa has been dealing with is causing power cuts and mine closures. These outages have occurred intermittently over the past decade. The national grid recently has suffered from heavy rain and flooding. These energy challenges will not be resolved overnight. 90% of the nation’s electricity is generated by state-owned Eskom. Harmony Gold, Impala Platinum, and Sibanye-Stillwater all said they had been forced to cut production because of power shortages. Principal sources are located in South Africa and in the river sands of the Ural Mountains in Russia. Multiple failures affecting about a quarter of the country’s power plants have forced the utility to introduce severe rolling “stage 4” cuts of 4,000 megawatts of power. The rolling blackouts have been escalated to stage 4, with a rise to stage 6 (a complete loss of power) expected. The jury is still out to see how quickly critical maintenance work can be completed. This is a deepening crisis at the debt-ridden utility and could trigger the risk of another recession. Either way, the chance of an already rhodium deficit growing could be very real.

Since 2015, the need for cleaner emissions and new standards has pushed rhodium back over $10,000 per ounce. Europe and China are leading the way in reducing vehicle emissions, as governments tighten emission standard rules in 2020. Vehicles will be required to contain around 30% more palladium, rhodium, and platinum. Rhodium supply is very small (less than 800,000 ounces produced annually according to Johnson Matthey). Even a small rise in demand can cause a drastic increase in price as we have seen. The unique properties of rhodium make a substitution in production nearly impossible and mining constraints leave little opportunity for increased production. Rhodium faces its first shortfall since 2014 due to rising demand from automakers. Consumption of rhodium by vehicle makers rose 14% in 2019 to 1 million ounces, creating a 26,000-ounce undersupply. Rhodium is a byproduct of platinum and nickel mining making it difficult to quickly increase production. Since the rhodium market compared to the other precious metals is very thinly traded, one can expect future fireworks and extreme volatility when it comes to price.

While one can not dispute the meteoric price gains in rhodium over the past few years, one could definitely question its liquidity. Most precious metal refiners don’t produce rhodium products and very few precious metal dealers buy and sell rhodium as an investment. Midas Gold Group is one of only a handful of precious metals dealer that buys and sells rhodium daily. Some investors have even recently chosen to take profits on rhodium investments and trade their rhodium bars and coins for gold and/or silver. Midas Gold Group provides the easiest, most convenient way to own and sell rhodium. Midas Gold Group buys and sells all rhodium bars and coins the main rhodium products that are out there on a daily basis providing a quick turnaround for a very thinly traded commodity. Call Midas Gold Group today at 480-360-3000 for a free no-obligation quote on liquidating your rhodium or possibly to see the availability of certain rhodium products available to own. Midas does business personally in Phoenix, AZ and Thousand Oaks, CA for local clientele and nationally in all 50 states via FedEx insured shipping.