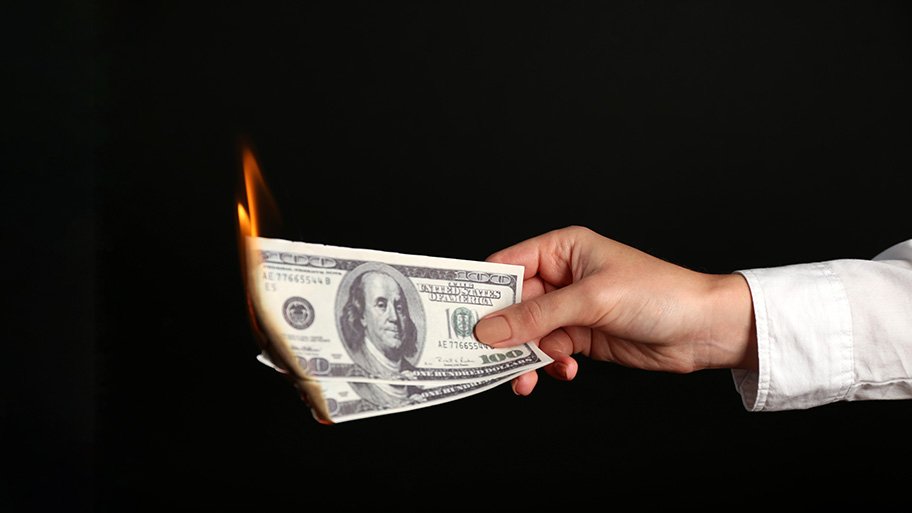 Our US Dollar is a Devalued Fiat Currency that is Failing

In 1933, the United States devalued our dollar by approximately 40%. The government redefined our dollar from being backed by about a 1/20th of an ounce of gold to only a 1/35th of an ounce of gold. In 1971 President Richard Nixon devalued the dollar again by completely taking it off the gold standard “temporarily”. Nixon stated, We must protect the position of the American dollar as a pillar of monetary stability around the world. The US dollar became a fiat currency, backed by nothing.

$100 in 1933 is equivalent to about $2,211.37 today. A $100 in 1971 is equivalent to $709.89 today. Depending on what figures you look at, the US dollar has lost over 90% of its purchasing power since that historical Nixon television address. Gold has increased by 47 times since the fiat currency experiment started in 1971. That fiat experiment is imploding and ending before our very eyes. If a currency is devalued too much, people can lose faith in it, and it becomes worthless.

Inflation is a lot worse than even the headline numbers

We contend that inflation has been a lot worse over the past twenty years than numbers would say. Inflation is front and center now and figures have it over a 40-year high. In 2020 an unprecedented amount of money was printed and distributed to the public. Exponential money stimulus was given to corporations and business owners. Instead of having the markets and the economy collapse, the central banks of the world chose inflation.

Over the last seven years, the commodity complex has seen underinvestment. The Commodity Capex is now less than US GDP. If we look at it simply, the commodity complex has been underinvested in, supply chains have been disrupted, a ton of money was printed, interest rates were kept abnormally low for a long time, people have changed the way they work from home, and we have nations that supply a great deal of grain and fertilizer are at war. The inflation rate may pause occasionally, but prices are not going back down. Inflation has a good chance of spiraling out of control.

Too much fiat money has been created out of thin air

The St. Louis Fed comes out each year with Onshore Dollar Supply figures. 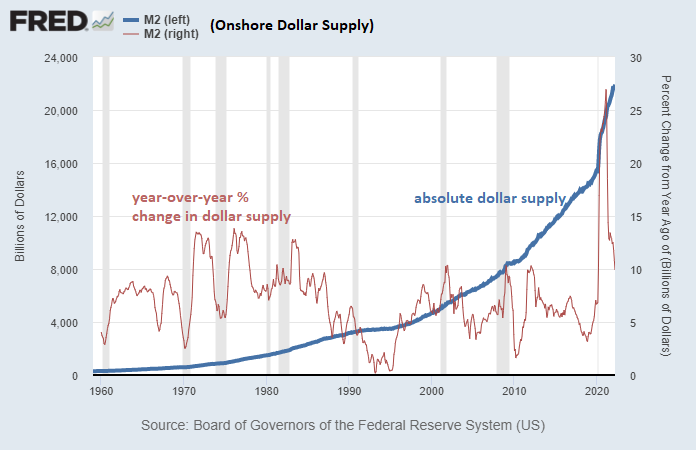 The absolute dollar supply in 1980 was about $2 trillion. This increased to about $5.5 trillion in 2000 and stood at roughly $8 trillion in 2010. At the beginning of the pandemic in 2020, the absolute dollar supply stood at roughly $15 trillion. We are over $22 or $23 trillion just two years later. Exponential money printing means an exponential risk for investors. You don’t need to be a big shot at the Federal Reserve to understand that. Our US dollar is a devalued fiat currency that is failing by all of this supply.

Voltaire stated, Paper money eventually returns to its intrinsic value: zero. Throughout history, a nation’s attempt to base its financial system on fiat currency has failed. We can start with the Roman Empire, China, France, and Germany. Many other countries have flooded their system with fiat currency and seen hyperinflation. Some to note would be Argentina, Hungary, the Soviet Union, Yugoslavia, and Greece. The US has followed the historical pattern of paper money. For investors to bet their entire nest egg that a similar fate won’t happen here is insanity.

US and global debt levels are spiraling out of control

A year and a half ago we wrote

“President-elect Joe Biden is currently proposing another $2 trillion out of thin air. US debt is already at $28 trillion. Unfunded liabilities are approaching $160 trillion. US debt has doubled every eight years since 1981. Obama took office in 2009 and inherited $8 trillion in debt. Eight years later US debt stood at $20 trillion while our military was weakened at the same time. In the eight years Obama was in office, he printed more money than the previous presidents had done in 200 years. President Trump came into office in 2017 with $20 trillion in debt. By historical measures, the US should be at $40 trillion in debt by 2025. Money supply increased by 25% in 2020. This coupled with very low interest rates is a recipe for rampant inflation. The US will be known as inflation nation.”

This sounds pretty accurate to me. Our US dollar is losing purchasing power and failing due to all of this debt. Maybe I should make $5 million a year like Whoopi Goldberg on The View.

Two years ago global debt stood at $255 trillion. Global debt today stands at roughly $305 trillion. That means that every 1% increase in the interest rate adds $3 trillion to the cost of servicing that world debt. That means that a huge chunk of the world’s GDP is spent on servicing debt. Interest rates are rising, and world debt has grown dramatically even in the last couple of years. This is not sustainable and will crash the financial system as we know it today. Investors have to diversify into hard assets, like gold and silver.

Almost two years ago we stated

“Speculation can make you rich but it can also cause you to go bust. Hard assets preserve your wealth. While many new traders are trading online blindly with free money from the government, wouldn’t it be wise to think about how all of this is going to end? Let’s protect most of what we have made if you are lucky enough to say that. Put your astute investor hat on and think about the return of our money when the joy ride ends, instead of chasing the return on our money after such a great run. Is risking it all worth it to try and get that last little bit?”

Today we see growth stocks being demolished; SPAC companies imploding, bonds losing more money than ever, crypto fortunes disappearing, and a financial system on its knees. Stocks have lost $5 trillion in value in 2022.

Yes, an opportunity will come from all of this devastation. Do you have to lose everything in the meantime waiting for all of this to play out? Physical gold is a great place to hide out while the Fed deflates what they inflated in the first place. Every day I hear a commercial on television from the World Gold Council. The question is who is listening and do they understand the message? The commercial states Throughout history I’ve observed markets shaped by the intention and unforeseeable. For investors who can navigate this landscape, leveraging gold, a strategic and sustainable asset. That path is gilded with the potential for rich returns. I’m not sure what that means and if the people watching it understand it either. I could write a much simpler commercial for you World Gold Council for a much more reasonable fee. We would say: Just get gold to protect what you have left and for what you want to be there going forward.