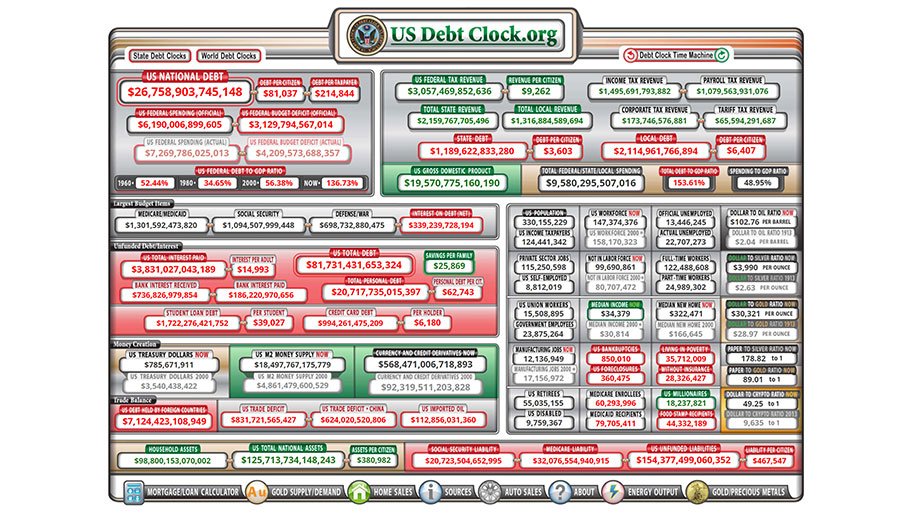 US Debt: The Ticking Timebomb

I found myself staring at the US Debt Clock site since Friday afternoon. It’s like watching a ticking debt time bomb. The issue of US debt has always been an occasional issue that is often spoken about in political circles. The issue of creating debt that our children will need to pay back is brought up, but the rate of debt accumulation only accelerates. The truth is that the debt will never be repaid, at least not in today’s currency.

We’ve decided to summarize some of the debt numbers in a table. A table that states the obvious; the US is in for a world of hurt. The US debt clock is mesmerizing shown a level of financial mismanagement at the highest levels of government that is simply disgusting. The government will continue to print more currency and continue to kick the can down the road until they cannot.

Debt is out of control and even understated

Let’s look at this in simple terms. The US National debt has grown from $15.6 trillion in 2012 to roughly $27 trillion today. If we forecast to 2024, the debt could swell to $46 trillion. But this is actually a myth. The government’s unfunded liabilities stand close to $154 trillion and could grow to $201 trillion by 2024. Unfunded liabilities are funds the government has promised to people but will not be able and aren’t legally required to pay. Social Security, Medicare, and veterans’ benefits are the bulk of some of these unfunded liabilities.

US Federal spending is accelerating with a pandemic and ongoing liquidity problems. The Fed started supplying liquidity to the repo markets in 2019. The pandemic has accelerated money printing and stimulus for who knows how much longer. Central banks are now supporting debt markets. At the same time, Federal tax revenues collected are dropping to $2.7 trillion this year to possibly $1.9 trillion in 2024. Potential big tax hikes for the uber-rich won’t be enough to offset this. Increased federal budget deficits could balloon to $5.1 trillion from $2.9 trillion as US Federal spending is accelerating from $3.8 trillion in 2016 to possibly $7.3 trillion and likely more in 2024. Gross debt to GDP is already 153% and could swell to over 188% over the next few years.

Derivatives are a bigger problem today than in 2008

The financial crisis of 2008 was mainly caused by mortgage derivatives. Total derivatives today are possibly more at $695 trillion and could hit $915 trillion in 2024. More credit, more leverage, more risk, is a no-win situation eventually. At the same time, the cost of living is going up on new median home prices due to abnormally low interest rates. Wage growth and income have edged up slightly, but this is nowhere enough to offset the falling dollar and rising costs. Federal debt per citizen is rising from $61k to $81k to possibly $134k in 2024. These experts are just not willing to admit the truth or fantasy land is just too far gone to do anything about now except to just print more money and take on more debt. We may as well call this The US Doom Clock.

If the ship is going to go down, I may as well go down with it. Absurd and unacceptable. We all have a choice. We can diversify some of our assets outside of the paper money printed by the government. There is one simple strategy to protect and preserve wealth. Diversify liquid funds and retirement funds with physical gold and/or silver. Call Midas Gold Group today at 480-360-3000 or 805-601-6000 for a private, no-obligation consultation. Preserve and diversify some of your assets or have the market take it eventually, it’s your choice. With the help of a gold specialist, it is easy to convert paper assets into tangible assets that have historically kept up with the cost of living. Hold on to your purchasing power. It’s either do that or go down with the ship. We can throw you a life raft, it’s up to you to grab on to it. Call a gold specialist today at Midas Gold Group. We can be reached at 480-360-3000 or 805-601-6000. The nation’s #1 veteran-owned gold dealer is waiting for your call.