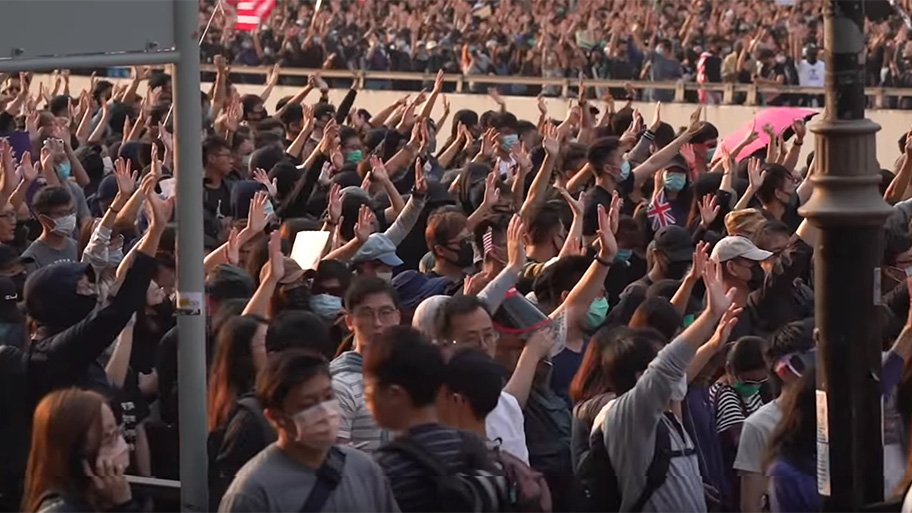 Last week China reacted to President Trump’s signing of two bills on Hong Kong human rights by complaining and then Beijing summoned the US ambassador to protest and warn about deteriorating relations with Washington. The US announced a delayed China tariff trade deal which is weakening the stock market in a usually strong period for stocks. Trump, who previously admitted that the Hong Kong bill may hurt negotiations with China, announced that he may delay any trade deal with China until after the 2020 presidential election.

Over the weekend Beijing decided to block US military ships and planes along the port with non-governmental agencies no access to the city of Hong Kong. China’s state-run news agency claims the non-governmental agencies such as Freedom House and the International Republican Institute among others have supported anti-China rioters in Hong Kong, and abetted their extreme and violent criminal behavior and incited separatist activities. Basically, the Chinese are blaming Americans in part for problems in Hong Kong. China has previously compared the Hong Kong protestors, demanding freedom, independence, and liberty to September 11th terrorists.

Thorny issues between the US and China have grown over the years. They range from restrictions on navigation in seas off the coast of China, trade wars, and let’s not forget that little issue with Taiwan. This is important since China has built islands to hide weapons.

What the recent actions should tell you is that the world is far more dangerous than many people believe and tensions between countries can spin out of control at the drop of a hat. This can happen or start at any time.

Wealth Preservation Plans are for the unknown

How people react, what financial markets do and what happens in the future are unknown. That is why a plan for wealth preservation is important. Wealth preservation plans protect you from the unknown. It protects your legacy and your nest egg. It’s your safety net.

It does not matter if the unknown is a decline in real estate value or a crash. Banking problems will occur once again, stock market declines, war or weather. Over long periods these are all unknowns that can impact your wealth. Failure to diversify assets into counter-cyclical assets such as gold and silver can expose the investor to excessive risk during times of economic uncertainty and economic chaos.

Gold is Essential for Wealth Preservation

Owning gold as part of a long-term wealth preservation plan can protect you and your family from global events such as countries constantly arguing, years of a do-nothing Congress and Wall Street’s quench for debt.

Global debt and debt here at home have exploded since the turn of the century and the risks posed by this size of debt have also expanded exponentially. All the private debt, government debt, derivatives, unfunded liabilities, and shadow banking loans are so large that trillions of dollars do not cover the amount. Subprime was the buzzword in 2008 and in 2020 it could be overnight repo.

Now, let this sink in for a minute, debt is just another word for liabilities. Liabilities that will never be paid back in this global government debt situation.

Congress is never going to change no matter who is running the show. Over the years Congress and all the different White House administrations told us that growth and low unemployment will eventually ease the debt burden and the liabilities of the nation have accumulated over the years.

So far that has not occurred. Money does not grow on trees and Congress feeds the debt by spending without hesitation that alone creates is a big unknown. Nixon taking the dollar off the Gold Standard in the early 70s was supposed to be temporary.

On the other hand, gold has no liabilities against it. When you own physical gold, it is yours. Gold has been a store of value for thousands of years and owning physical gold becomes far more important when some unknown events surface in the economy or around the world. Based on experience this is likely again.

What you can do to preserve your wealth?

You might also consider placing gold bullion into your Individual Retirement Account (IRA) to preserve your wealth.
You can own the gold bars or gold coins and by owning the gold you are on your way to preserving your wealth with an essential wealth preservation plan. Your entire family can sleep peacefully at night knowing you have some money protection in place for the next financial crises. And yes it is on its way.

Among 10 imminent threats to your financial well-being noted by Midas Gold Group in our 2019 whitepaper is the rise of the Chinese Economic Superpower. China ultimately seeks global economic dominance and is increasingly competing in the global currency market even while manipulating its currency.

Deteriorating relations with China, trade wars, unrest in Hong Kong only add to the threat China poses to the dollar strength and global economic stability.

Click here to request the 10 Imminent Threats to Your Finances whitepaper that has been endorsed by Sebastian Gorka, former Chief Strategist to President Donald Trump.