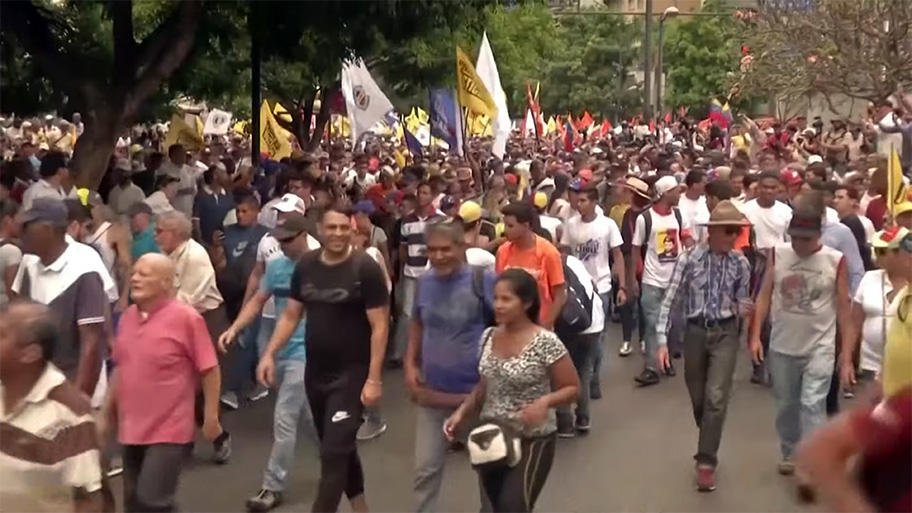 The United States under President Biden is acting like Venezuela

Venezuela was once the richest country in Latin America. People from America came to Venezuela to build businesses. From the 1950s to the early 1980s, the Venezuelan economy, which was buoyed by high oil prices, was one of the strongest and most prosperous in South America. During the collapse of oil prices in the 1980s the economy contracted. Venezuela went socialist as Hugo Chavez promised the poor social and economic reforms. Many voters believed him, so did many American leftists. Venezuelans are now trying to escape. Democratic socialism is not the route to paradise. Socialists created much more extreme poverty. John Stossel of StosselTV recently wrote an interesting article on how Popular Progressive Policies Helped Ruin Venezuela. They Won’t Work Here Either.

In this week’s article we look at Venezuela then, Venezuela now, and the probability that popular progressive policies will lead the United States down the same road.

Only the army, police, and certain groups now have guns in Venezuela

Venezuela also passed gun control laws, something else the Democratic Party would like to do. Venezuela banned private gun ownership. Venezuelans discovered that taking away their guns made it easier for the government to come to your home or business and take away your property. The murder rate also rose as criminals get illegal guns. In April President Biden announced a slew of new gun control measures after a recent pair of high-profile mass shootings, and insisted the Second Amendment doesn’t grant an absolute right to own guns. No amendment to the Constitution is absolute, Biden maintained, pointing to the famous Supreme Court ruling that you can’t yell fire in a crowded theater as part of the First Amendment’s free speech clause. Biden said that if the Lord came out and said, ‘Joe, you get one of these,’ he would eliminate legal immunity for gun manufacturers. Good luck getting Americans to give up their guns. We can ban assault weapons as Biden announces slate of gun control agendas. The fact of the matter is if the White House had its way, the gun laws here would mimic Venezuela.

Hugo Chavez thrilled American celebrities by embracing not just socialism, but the very ideas they advocated. Susan Sarandon, Sean Penn, Naomi Campbell, Danny Glover, and others thought Chavez could walk on water. Sean Penn said Chavez was one of the most important forces we’ve had on this planet. Democrats want to add 4 new justices to the Supreme Court to total 13. Venezuela added 12 members from 20 to 32 to their Supreme Court and the court has never ruled against Chavez. Socialist rule in Venezuela was protested vigorously by civilians. The policies that the American celebrities loved created hardships for the everyday person in Venezuela. Now even basic protest is illegal. Hate speech laws were created to ban Venezuelans from spreading violent or hateful content through television, radio, or social media platforms. Half the Democrats today want hate speech laws and a ban on hate speech. The ruling party would define what hate speech is. Many progressives want to outlaw hate speech as they say hate speech is fundamentally at odds with the Constitution. How many celebrities supported Biden in 2020 and trashed President Trump in every way they could? Patriotism through the US Constitution is being ignored by this new regime. Hate speech laws and Supreme Court shenanigans are leading the US down the road of Venezuela.

The Venezuelan government believes it can fund anything by simply printing more money. Biden says spending and printing will drive down prices. Our government is delusional. The White House will spend much more of our money through the Infrastructure Bill without creating an inflation problem. The American Government thinks we can print to infinity and it won’t cause inflation, it will just stimulate. Venezuela printed money and said it would help the poor. The poor were hurt the most with the inflation that followed. Inflation in Venezuela is out of control as their currency is worthless. Inflation here in the United States is 5.3% but that doesn’t mean hyperinflation can’t happen. President Biden has already passed $10 trillion worth of spending in the last year. Many more trillions are on the way. The Biden administration could pay out up to $1 billion to immigrant families that were separated at the US-Mexico border during the Trump administration. According to The Wall Street Journal, the US Departments of Justice, Homeland Security, and Health and Human Services could end up paying out close to $1 million per immigrant family that were separated at the border. Sources told WSJ that around $450,000 a person is being considered, but could change depending on each family’s circumstances. If we look at fiscal policy and the insatiable appetite to spend and create debt, the US is acting like Venezuela.

Talk about Venezuela now and using gold as currency

The currency of Venezuela is the bolivar. According to Joseph Salerno,

“The Venezuelan government recently lopped off six zeros from its hyperinflating currency, the bolivar. The highest denomination currency note of 1 million bolivars, worth less than $0.25, was replaced by a one-bolivar note. At the same time, a 100-bolivar note, worth about $25.00, was introduced as the new highest denomination of the bolivar. The currency conversion was designed to spare the government the embarrassment of having to issue a 100-million bolivar note to enable people to purchase everyday items without having to carry around bundles of notes, given that the price of a loaf of bread had risen to 7 million old bolivars. Of course, the arbitrary scaling down of the denomination of the currency will not slow inflation, because the new currency notes can be printed just as cheaply as the old. The bolivar has already lost 73 percent of its value in 2021 alone and the IMF estimates the annual inflation rate will reach 5,500 percent by the end of 2021.”

Many citizens are forced to use the US dollar, Brazilian real, and the Columbian peso.

Southeastern Venezuela has turned to gold nuggets for their medium of exchange. Gold flakes used as currency here are carried in people’s pockets, often wrapped in the worthless bolivar. Gold is also starting to penetrate the nearby cities, such as the regional capital Ciudad Bolivar, as stores in shopping malls gladly accept the gold in exchange for dollars from miners who are seeking to cash out. Do I think US citizens will use gold flakes as currency someday here? Probably not. Do I think that our dollar is headed towards a similar fate as the bolivar? Probably yes to a lesser degree. Our US dollar will lose tremendous buying power over the next few years. Do I think US citizens should protect their paper currency right now and get some money out of the markets and banking system? Absolutely! The United States is headed in the wrong direction on every front just like Venezuela did when Chavez took over with his socialistic agenda. Venezuela’s progressive ideas didn’t work there, and the same socialist agendas won’t work here either. The least we can do is protect our nest egg with physical gold before it all comes down like a house of cards. Where there is smoke there is fire. If it looks like a duck, walks like a duck, and sounds like a duck, it’s probably a duck.