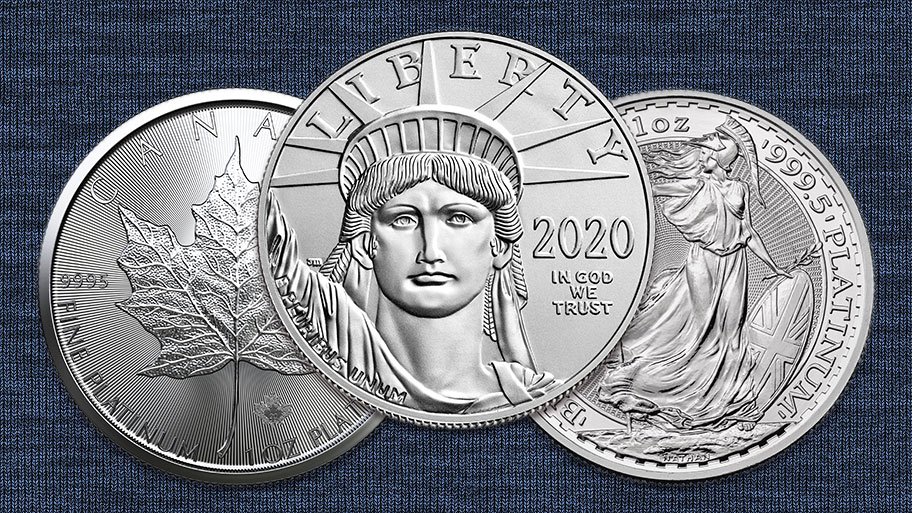 As platinum prices compared to gold remain historically low, many investors are adding platinum assets to their investment portfolios. These are three popular platinum coins to consider.

Platinum is a chemical element with the symbol Pt. Its atomic number is 78. Platinum is a dense, malleable, ductile, highly unreactive, precious, silverish-white transition metal. Platinum has long been referred to as “rich man’s gold” as it has historically traded at a hefty premium to the price of gold. Even after going up 10% during Q1 2021, the price of platinum is still less than $500 per ounce less than the price of gold. According to the World Platinum Investment Council automotive demand for platinum is expected to grow by 25 percent to reach almost three million ounces, 5% above pre-pandemic levels. UK and EU CO2 emissions targets came into effect in January of 2021. Platinum should also benefit from the new China VI standards applicable to heavy-duty vehicles. The US is pushing clean air initiatives aggressively as we all know. The World Platinum Investment Council even expects a platinum deficit for 2021 of 200,000 ounces, but this could be low. Many palladium applications are shifting to the less expensive platinum metal. 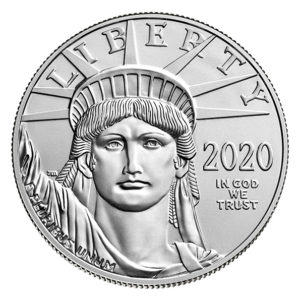 The Platinum 1oz American Eagle is the only platinum bullion coin from the US Mint. The Platinum Eagle was introduced in 1997 and has been in regular production at the US Mint since 2016. On the obverse side of the 2021 1oz American Platinum Eagle coin is John Mercanti’s depiction of Lady Liberty. The reverse face of 2021 American Platinum Eagle coins bears a design with an American bald eagle in flight as designed by Thomas D. Rogers. The purity of the coin is .9995, the thickness is 2.5mm, the diameter is 32.7mm, the edge is reeded, and has a face value of $100. The coin is in brilliant uncirculated condition. The Platinum American Eagle is available for personal possession and meets the purity criteria of the Gold IRA. 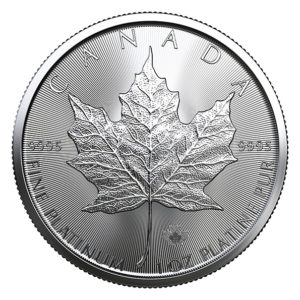 The Platinum 1oz Canadian Maple Leaf is the world’s most popular platinum coin. The Platinum Maple Leaf was introduced by the Royal Canadian Mint in 1988. The Platinum Maple Leaf is similar in design to its silver, gold, and palladium counterparts. The obverse of the Canadian Maple Leaf can contain three different portraits of Queen Elizabeth depending on the year issued. The reverse of the Canadian Platinum Maple Leaf coin features the sugar maple leaf. This particular maple leaf depicted on the coin was created in 1979 by Walter Ott. The right-profile portrait of Queen Elizabeth used since 2003 was created by Susanna Blunt. The purity of the coin is .9995, the thickness is 2.62mm, the diameter is 30mm, the edge is serrated, and has a face value of 50 Canadian dollars. The coin is in brilliant uncirculated condition. The Platinum American Eagle is available for personal possession and meets the purity criteria of the Gold IRA. 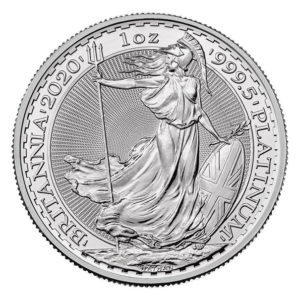 The Platinum 1oz Britannia was introduced by the Royal Mint of England in 2018. British Britannia coins were introduced by the Royal Mint of England in 1987 with the debut of the Gold Britannia. On the obverse side of the 2021 British Platinum Britannia Coin is a depiction of Queen Elizabeth II. Her Majesty is featured in right-profile relief by Jody Clark with the George IV State Diadem Crown on her head. The reverse side of the 2021 1oz British Platinum Britannia Coin uses the Philip Nathan image of Britannia, a feminine personification of the United Kingdom. This is common on the gold and platinum coins in the series. Britannia is portrayed along the coast with a three-pronged spear clutched in her right hand and a shield and olive branch in her left. The shield guards the British Isles and features the Union Jack design, while the trident gives her control over the seas. The purity of the coin is .9995, the diameter is 32.69mm, the edge is reeded, and has a face value of 100 pound Sterling. The coin is in brilliant uncirculated condition. The Platinum Britannia is available for personal possession and meets the purity criteria of the Gold IRA.

The Biden Infrastructure Plan has been in the news a lot lately. The new administration is constantly pushing climate change initiatives and a carbon-free future. Vice-President Harris said this week that the root cause of the migrant surge at the border was due to possibly extensive storm damage because of extreme climate. We’re looking at the issue of climate resiliency and then the concern about a lack of economic opportunity. Many parts of the world are preaching cleaner air and cleaner emission standards. This is ultimately very positive for platinum demand and the use of platinum in catalytic converters. There isn’t enough platinum above ground to meet this demand. According to Auctus analysts, Platinum Group Metal supply seems to be moving from South Africa towards Russia and Zimbabwe. This trend supports higher palladium supply but lower platinum and rhodium supply. Many of our clients own platinum at lower prices, but even here platinum seems like a solid value. Its all-time high of $2,080 is still a pretty good distance away. Palladium has gone from $600 to $2,900 over the past few years. Rhodium has gone from $4,000 to $29,000 an ounce recently. Platinum is in a great position to catch up in price. In this crazy paper market that’s in a bubble, it’s also a nice privilege to hold some of these beautiful coins in your possession or in your IRA as well. It’s a big advantage to pass on this metal as part of your legacy. Jump on the platinum train while you can. All aboard!