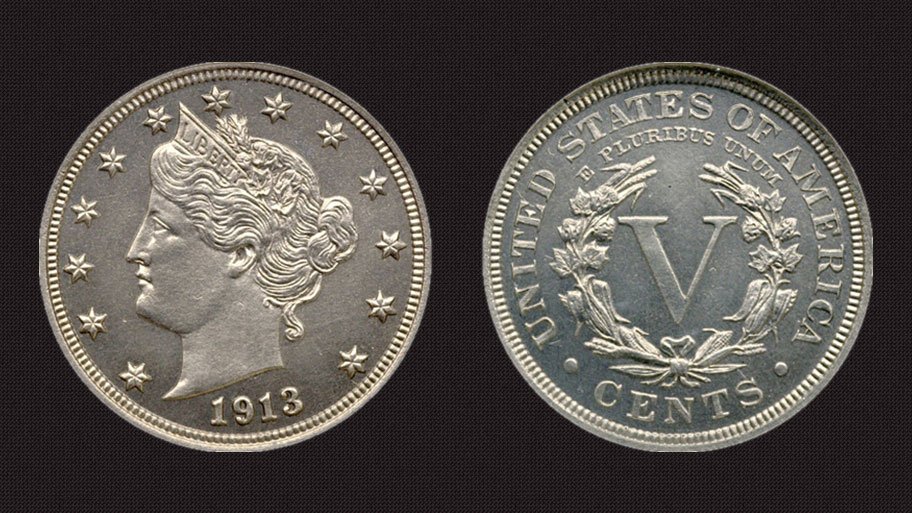 Three of the Most Valuable Coins out there

Coins have been a method of payment since the 6th or 5th century BCE. Always a store of value, the invention of coins has been surrounded by mystery. Herodotus claims the first coins were minted by the Lydians. Aristotle claims the first coins were minted by Demodike of Kyrme. In 1792, the American Congress passed the first coinage act. The Coinage Act of 1792 meant that the US Mint was officially responsible for creating coins for public use. The first US circulating coins were delivered by the US Mint on March 1, 1793. These 11,178 copper cents were larger than a modern quarter and considered bulky by the public. In this week’s blog, we examine three of the most valuable coins of today.

The Liberty Head V Nickel of 1913 (pictured above) contained no mintmark. The face value was $.05 and contained no silver. In 1920, five Liberty Head nickels dated 1913 were found to have been produced before the Indian Head nickel was introduced in February of 1913. The origin of these is surrounded in mystery as it is claimed they were minted privately by Samuel Brown or they were possibly a test of the new coinage dies by the Mint’s Medal Department. The Louis Eliasberg specimen of the five Liberty Head nickels is the finest and is graded at MS66 from various professional grading services. A rough estimate for this coin could be between $3 and $5 million at auction. The other four 1913 Liberty Nickels are referred to as the Olsen specimen, the Norweb specimen, the Walton specimen, and the McDermott specimen. These five coins are as rare as they come.

The 1870 Liberty Seated Dollar was minted with no mint mark, CC (Carson City), and S (San Francisco). The coins minted at San Francisco are far more valuable. The face value was $1 and contained 90% silver and 10% copper. The silver weight was .7735 Troy ounces. Fifteen coins were minted at the San Francisco mint. This is one of the most famous and rarest of all US coins and one of the few cases where the US Mint had no official record of ever producing these coins. These coins can be identified by a smaller than normal San Francisco “S” mintmark located under the eagle on the reverse of the coin. This Christopher Gobrecht designed coin in near uncirculated condition or a higher grade can fetch over $1 million. An even higher grade of the 1870 S Seated Liberty Dollar can demand over $2 million at auction.

The 1927 D St. Gaudens Double Eagle was minted in Denver. The 1927-D Double Eagle is legendary and has earned its status as the rarest regular-issue gold coin of any denomination of the 20th century. The 1927-D twenty had a relatively low mintage of approximately 180,000 pieces. This alone, however, does not account for its rarity, that is more a function of its very low survival rate. The 1927-D was extensively melted in the 1930s, virtually eliminating the entire production run. The 1927 D possibly were never issued or were disproportionately turned in when President Roosevelt issued the gold surrender order of 1933. The gold content of the coin is 90% and has a face value of $20. The gold weight is .96750 troy ounces. The value of this coin today is approximately $250,000 in average condition and up to $1.5 million in mint state condition. Possibly close to ten of these 1927 D St. Gaudens exist. Other very valuable $20 St. Gaudens are the 1921, 1924-S, 1926-S, 1926-D, 1927-S, and 1931-D.

Wouldn’t it be nice to dream? Imagine finding a gem like one of these in our grandparent’s attic. The bottom line is we find many things in our grandparent’s attic. Many of us will be left an inheritance of some sort. All of us will leave some sort of legacy. In an age of money printing, bonds, annuities, debt, credit, and bankruptcies, it would be wise to think about leaving something that will always have value. Gold and other precious metals have always been worth something. Bars and coins over time have historically always held their value. Very few of us if any will own one of the coins listed above but we all have something to preserve. Many experts believe that much of that could be wiped out if and when the system collapses over the next decade. The enormous debt and leverage in the system are not fixable. The can be kicked only so far down the road. Protect and preserve for the inevitable. If you are interested in preserving your wealth in coins or bars, call Midas Gold Group today at 480-360-3000 or 805-601-6000. Numismatic or bullion products will hold their value over time and possibly increase substantially when our paper system crumbles. Diversify and hold onto some of your legacy before the market takes it away. Call Midas Gold Group today at 480-360-3000 or 805-601-6000. The nation’s #1 veteran-owned gold dealer will fight to protect what you have and what you are leaving behind.