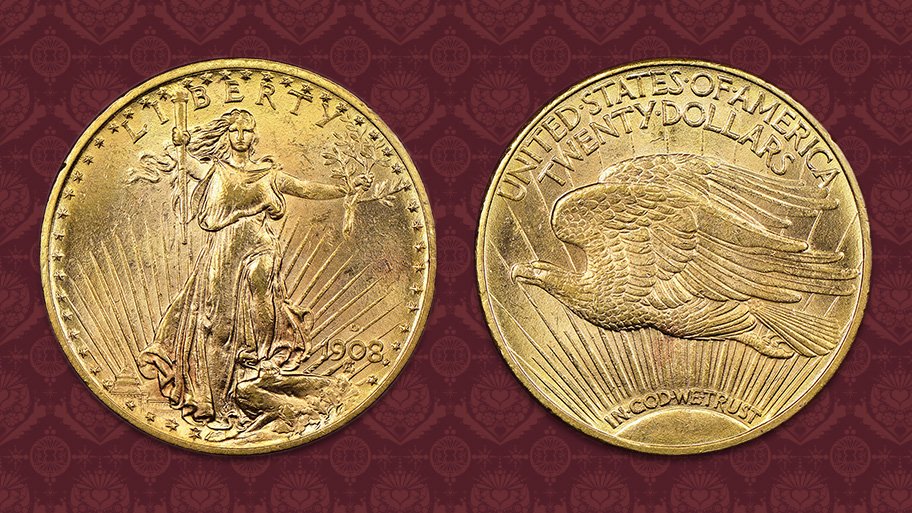 The Saint-Gaudens Double Eagle is the most popular and recognizable coin in United States numismatics. The front and back of the coin, designed by the most preeminent American sculptor of the 19th Century, Augustus Saint-Gaudens, is a landmark in numismatic history. The Saint-Gaudens Double Eagle series, minted between 1907 and 1933, is world-renowned as the most beautiful coin ever created by the United States, and, fittingly enough, the story behind its creation is dramatic. Gold investors should also be aware of this coin as owning it for its gold value may be an excellent way to add value to your investment portfolio.

The Most Expensive Coin Ever Auctioned in 2009

On December 8, 2009, a 1933 Saint-Gaudens Double Eagle became the most expensive coin sold at auction. It was the world’s first $7.59 million coin in 2009. Another record has been set since then.

The 1933 Saint-Gaudens Double Eagle was the last year of the series. In 1933, an executive order stated forbidding the hoarding of gold coin, gold bullion, and gold certificates within the continental United States. The US Government also ordered all newly minted 1933 Saint-Gaudens Double Eagles to be melted, except two coins donated to the Smithsonian Institution. Several pieces surfaced from the 1930s through the 1950s, and most were confiscated and destroyed by the Secret Service. Then in 1996, an example that once belonged to King Farouk of Egypt turned up in the hands of British dealer Stephen Fenton. Secret Service agents confiscated the coin. After lengthy litigation, the US government legalized the coin, making it the only 1933 Double Eagle legal to own. The coin was sold raw (uncertified) at auction in 2002 for $7.59 million, to be offered again in June 2021 by Sotheby’s, where it realized a world-record price of $18,872,250. The most expensive ever sold in a public auction, the coin has since been graded MS65 and encapsulated by PCGS.

If the Saint-Gaudens Double Eagle stands out as looking different from many of the coins created the century before, it’s because everything about it was a challenge to tradition. Through President Roosevelt’s pure force of personality and will, it became the first coin designed by an artist outside the US Mint. Even the original design had to be modified after it was discovered that it took three blows of the press to bring the relief to the level of required sharpness. Later the design was somewhat modified by lowering the relief so that it could be reproduced without breaking the machinery. The relief was so high that the initial design called for a wire rim high enough to allow for even stacking of the coins. The initial date 1907 appeared in Roman numerals, MCMVII, as a kind of homage to the ancient coins that inspired it, though the Roman numerals were later dropped and exchanged with the traditional Arabic numerals. The motto IN GOD WE TRUST was not a part of the original design, owing to a personal preference from President Roosevelt. In 1908 Congress ordered the motto reinstated.

Still, since its inception, the Double Eagles of Augustus Saint-Gaudens began trading at a premium as soon as they hit the marketplace. Almost instinctively, the people of the early 20th Century sensed the classic nature of the designs; and that the design itself was conceived with the utmost care and consideration.

The Saint-Gaudens Double Eagle series continued until 1933, which was the same year President Franklin Roosevelt confiscated that nation’s gold, allowing only numismatic collectors to hold onto gold coins. Most of the coins of the middle series, between 1920 and 1930, were not circulated but kept in Treasury vaults; therefore, these dates tend to be in incredibly good condition. Some were shipped overseas in payment for international transactions. Many foreign governments and banks were not eager to return the coins to the United States and held onto them. The gold coins captured by the government during the recall of 1933 were melted. The US Mint sent two of the 1933 Saint-Gaudens Double Eagles to be kept at the Smithsonian Institute. Consequently, what would otherwise be high mintages, suddenly become scarce. It wasn’t until after World War II that some countries, like Switzerland and Argentina, released large quantities of Double Eagles. Most of these released coins made it into the hands of numismatic collectors.

Today, the first of the series, the MCMVII issues, are available but are in great demand. There are about 20 Ultra High Relief MCMVII specimens and are quite a prize. The 1927-D has only 15 are known to exist. The Saint-Gaudens Double Eagle has been a popular series since it was first minted in 1907. Holding any specimen from this amazing series of Double Eagles is an object of pride.

The History of the Double Eagle (President Roosevelt’s “Pet Crime”)

Having Saint-Gaudens create his inauguration metal was a shrewd maneuver by the President, who already began to think about his “pet crime.” His “pet crime” was to have Saint-Gaudens design an entire set of new coinage. The idea percolated in Roosevelt’s head for some time. Then, on December 27, 1904, he wrote to Leslie Mortier Shaw, the Secretary of the Treasury,

“I think the state of our coinage is artistically of atrocious hideousness. Would it be possible, without asking permission from Congress to employ a man like Saint-Gaudens to give us a coinage which would have some beauty? After all, this is the United States, we should have coinage that we’re proud of.”

Saint-Gaudens responded enthusiastically but conveyed reservations that Charles Barber would go along with the idea. Leaning forward with clinched fist pounding to the table to emphasize key points, Roosevelt forced the Mint to engage Saint-Gaudens. There were certain coins the President could commission without Congressional approval. Those were to redesign some of the coins which could be changed without the Congressional approval, the cent and the four gold coins that were issued at the time: the $2.50 Quarter Eagle, the $5 Half Eagle, the $10 Eagle, and the $20 Double Eagle. The top brass at the US Mint was offended. The entourage, led by the Chief Engraver Charles Barber, obstructed and resisted wherever possible; after all, no US coin had ever been designed by anyone other than a Mint employee.

Theodore Roosevelt was pleased with the way the medal turned out and wanted to commission Saint-Gaudens to create designs for the country’s coinage. President Roosevelt wrote to Saint-Gaudens suggesting he create something along the lines of the high relief gold coins of Alexander the Great. Would it be well to have our coins in high relief, and also to have the rims raised? Roosevelt asked.

“You have hit the nail on the head with regard to the coinage. Of course, the great coins, and you might say the only coins, are the Greek ones you speak of, just as the great medals are those of the fifteenth century by Pisani and Sperandie. Nothing could please me more than to make the attempt in the direction of the heads of Alexander, but the authorities on modern monetary requirements would I fear ‘throw fits’ to speak emphatically if the thing were done now. It would be great if it could be accomplished, and I do not see what the objection would be if the edges were high enough to prevent the rubbing. Perhaps an inquiry from you (Mr. President) would not receive the antagonistic reply from those who have the say in such matters that would certainly be said to me.”

Correspondence continued between the two men until designs for the $10 Eagle and $20 Double Eagle were developed.

The Design of the Saint-Gaudens Double Eagle

The obverse showed the figure of Lady Liberty walking towards us. She holds a torch in one hand and an olive branch in the other. The reverse is the sculpted eagle in flight against rays of sunlight. Earlier versions of the design had the date in Roman numerals below the flying eagle. The style was suggestive of the Art Deco movement which would begin 15 years later.

President Roosevelt loved the results of his “pet crime.” He wasted no time in sharing pieces struck in high relief to his friends. In one letter that accompanied a brand new high relief MCMVII Double Eagle, he wrote that it is the best coin that has been struck for 2,000 years. President Roosevelt sought to create a majestic piece of gold coinage that would say more about the nation that issued them than any other coin previously struck at the US Mint.

“…there is no thought of issuing new coins of the 50-cent, 25-cent, and 10-cent values. If, however, a change is made we all hope that more serviceable and satisfactory coins are produced than the recent Saint-Gaudens Double Eagle and the Eagle and the Pratt Half and Quarter Eagle. The Buffalo nickel and the Lincoln penny are also faulty from a practical standpoint. All resulted from the desire by the government to mint coins to the satisfaction of artists and not practical coiners.”

Despite the “not practical” designs of the US coinage of the early 20th Century, they remain the most memorable and striking of US numismatic history.

Reuse of the Double Eagle Design

When the American Gold Bullion program started in 1986, Saint-Gaudens’s design for the Double Eagle was used for the obverse with two stars added (recognizing the admission of Alaska and Hawaii) next to the two added by Barber in 1912.

Augustus Saint-Gaudens had designed a masterpiece, but he didn’t live to see the final result. Saint-Gaudens died the same year he finished sculpting the final work. His final gesture was etching his initials into the back of the 1907 plaster cast. The Mint, using the best technology at the time, made several attempts to produce 1907 MCMVII as the artist conceived it. The Mint had to make compromises to produce Saint-Gaudens’s Double Eagle in the quantities needed for circulation.

Finally, manufacturing technology caught up to the artist’s vision. By 2008, the US Mint had transitioned to digital technology completely changing the way a coin is made. The acting Mint Director was Edmund C. Moy sent a memo to Treasury Secretary Henry Paulson seeking approval to mass-produce the 1907 Double Eagle just as Augustus Saint-Gaudens intended. Naturally, Paulson approved the project.

As the Mint released a 2009 version of the Ultra High Relief Double Eagle, this time perfected by advancements in modern technology, acting Mint Director Edmund C. May said, few things are more a part of our everyday lives than our coinage; it is part of what defines America. That is what Saint-Gaudens illustrated so well. His 1907 Double Eagle tells the rich story of the Nation at the turn of the century and what it aspired to be.