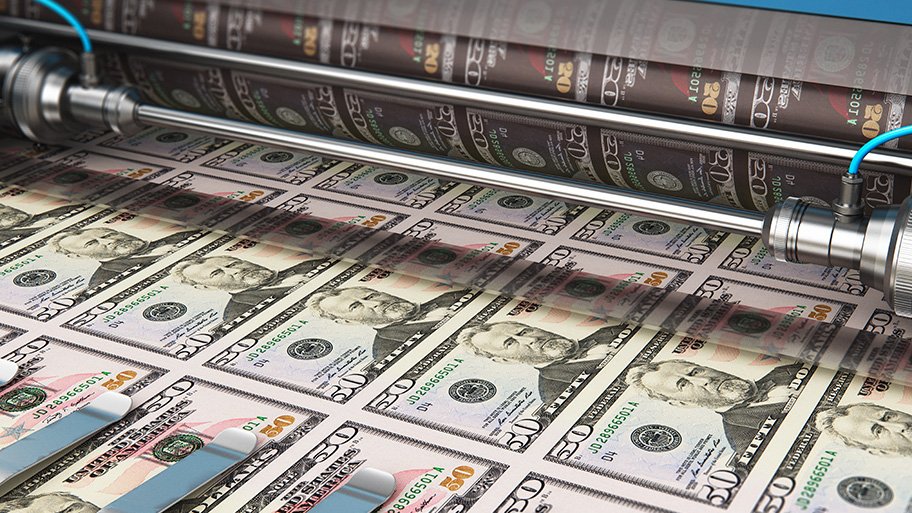 Reckless Money Creation Is the Main Reason Many People Own Gold

Many reasons are given for wealth preservation through physical gold. We have talked at length about inflation, government debt, and a bubble in stock and bond markets. The mother of all bubbles has now been inflated to obscene levels because of abnormally low interest rates for an extended period, even negative rates in some instances, debt, government stimulus, and artificial engineering to fudge many numbers including the CPI index which has grossly underestimated price increases for years.

While this is all true, the main reason to own gold is that our fiat paper currency is being debased and devalued into oblivion. Politicians and central bankers for decades have been creating and printing money out of thin air which erodes our purchasing power. This unlimited money creation has led to the bubble situation we are in today, and much more money creation is to come. If the Fed stops printing and the government stops spending and borrowing the whole system immediately dies. Any way you look at it the purchasing power of our paper dollar is doomed. That’s why we own physical gold to preserve what we have left. Our money can not just disappear when this financial system fails.

Money creation has gone exponential since 2008

In 2008 the subprime mortgage crisis brought the markets to its knees. This crisis was a direct result of money creation and Wall Street criminals bundling mortgage bond instruments. This financial situation was not fixed. Quantitative easing programs were introduced and unlimited money creation took flight. It’s gotten a lot worse and has moved to supersonic speed. Since 2008 the US has increased its aggregate money supply by 500%. We have printed 10 times more money in the last decade than was created since the beginning of our nation. What’s this endless money creation going to do to your dollar? That’s why you own gold.

Since 2012, the US Government has more than tripled its public debt levels. $30 trillion could be $50 trillion in just a few years. Unfunded US liabilities are probably more than $200 trillion. This system led by our wonderful politicians and central bankers is thoroughly addicted to money creation out of thin air. And while all of this money is being printed, what exactly is being produced? Nothing is being produced. Most of it has gone into paper assets inflating this everything bubble. This kind of money-creation-backed system will destroy your dollar. That’s why you own gold.

Money printing has led to lies by the Fed

M1 is the money supply that is composed of currency, demand deposits, and other liquid deposits which include savings deposits. The aggregate money supply is represented by M2 and M3. All of these metrics used to be reported regularly by the Fed. These money creation numbers have gotten so embarrassing, that the Fed decided to no longer report this data. I guess they will try and hide the horrors of their money creation for as long as they can to keep everyone involved in the paper system. Without more paper money creation the system and our money die. That’s why you own gold.

Even with all this money creation, wages have lagged for everyday folks

Folks, many think that more money creation means more money to go around for everyone. Well, that’s absolutely wrong. It’s a system that only benefits a small minority of us. The ones who benefit are the elite and the CEOs of major corporations. True unemployment is probably more than 20%. Many have given up looking for a job and many new jobs counted are people taking a second job. Don’t believe the skewed lies we hear about 3%, it is nonsense. Since 1978 CEO compensation has grown by more than 900%, while employee compensation for the same period grew by 12%. What will your dollar do in this rigged financial system with the money creation benefitting a very small minority of us?

Money creation leads directly to market speculation. Leverage on some of these markets and contracts could be 100 or 200 to one and sometimes even more. Free markets are now casinos with many big surprises right around the corner. Money creation does not lead to order, just the opposite. This reckless money creation that created a market bubble will also be its demise. What would a market implosion do to your dollar?

How can our leaders think that spending more will help this system? How can our central bankers think that they can print as much money as they would like? Why would anyone think that more debt will fix a debt problem? Maybe they have no choice. Maybe our system has been infiltrated by criminals and the only way to keep the game going is to keep printing and spending until it all blows up. The problem is when it blows up, most people will lose everything.

I hear every day that the dollar is strong. Strong compared to what? Maybe the dollar is stronger than the euro or the yen or some other of the garbage fiat currencies out there that are headed to zero. My dollar certainly isn’t strong at the grocery store, the gas station, or just about anywhere. Everything is going up in price. I guess I need to shop in England to enjoy the dollar’s strength. Fiat currencies steal your purchasing power. It’s their game that they have been playing for a long time. Stop believing the lies. Fiat money does not benefit us. Fiat money and money creation allow their dirty game to continue until the system and their fiat die. It’s our money that they want to control their system. If you are timid and keep all of your money in this money-creation fiat system you will be destroyed when it comes down. If you are bold and get some gold, you will survive financially. When the bubble bursts and the you know what hits the fan, you will be glad you have gold.