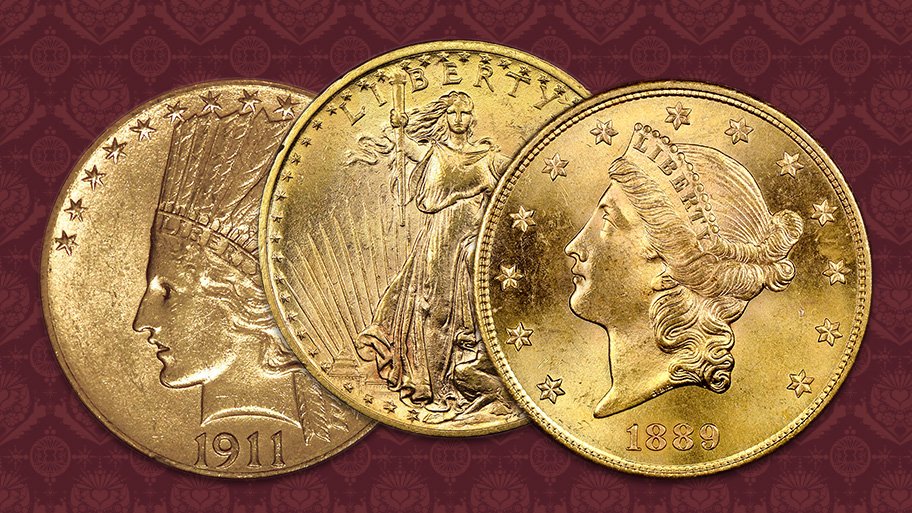 Great investment in the gold market aren’t always in gold bullion itself. Some rare coins double and triple in value in short periods of time. Midas Gold Group is not only the nation’s #1 veteran-owned gold dealer trading over $100 million in precious metals but is also a full-service gold specialist for many investors. Many investors are looking for bulk gold or bulk silver for diversification and a hedge against inflation or a falling dollar. Other investors seek rare coins that represent important events in monetary history. The rare coins market has shown the potential for fast growth; certain coins could appreciate significantly over the next few years. In this week’s article, we cover three gold coins that are special and possible to own for an investor in today’s market.

The 1911 S $10 Indian Head Gold Eagle is an exceptionally rare coin. The S stands for the San Francisco Mint. The designer and engraver is Augustus Saint-Gaudens. The mintage was only 51,000. The metal composition is 90% gold and 10% copper. The edge is 46 raised stars. The $10 denomination means that this coin was one of the half-ounce gold coins at that time. A 1911 S $10 Indian Head Gold Eagle in mint state condition has demanded anywhere between $15,000 and $40,000 at auction depending on the quality.

The 1908 S Saint-Gaudens Double Eagle is a terrific coin. The S stands for the San Francisco Mint. The designer and engraver is Augustus Saint-Gaudens. The mintage was a mere 22,000. The S version of this coin is the most valuable of the 1908 version. The edge is lettered. The $20 denomination means that this coin is a one-ounce gold coin. The metal composition is 90% gold and 10% copper. A 1908 S Saint-Gaudens Double Eagle in mint state condition has fetched anywhere between $18,000 and $90,000 at auction depending on the quality.

The 1889 Liberty Head Double Eagle is an excellent coin. Total mintage for the 1889 $20 Liberty Head was approximately 850,000. Approximately 44,000 were produced with no mintmark. The no mintmark version of this coin is the most valuable of the 1889 version. The edge is lettered. The $20 denomination means that this coin is a one-ounce gold coin. The metal composition is 90% gold and 10% copper. The designer is James B. Longacre. An 1889 $20 Liberty Head Double Eagle with no mint mark has fetched anywhere between $18,000 and $40,000 at auction depending on the quality.

These gold coins are known as numismatic coins. These coins survived the 1933 Executive Order that attempted to make the ownership of gold illegal and a criminal offense. The government needed to print more money and have a monetary system where that was possible. Paper money would never be the same again. As stated in a previous Midas Gold Group blog was that in 1933, President Franklin D. Roosevelt issued executive order 6102 forbidding the hoarding of gold coin. However, throughout the 1930s and thereafter, the US government continued to use the Saint-Gaudens Double Eagle and other gold pieces as currency particularly for business with Europe which preferred the gold coins to paper currency and banknotes. As a result, giant hordes of pre-1933 US coins have been purchased out of European vaults and repatriated to the US where they are favorites among collectors.

The price of gold fluctuates daily. There is a pretty decent chance that based on our current monetary system that the government will be required to print more money, expand credit further, and do whatever it takes to keep this fiat currency system going. There aren’t many guarantees in life, but one that we can be pretty sure about is that the dollar buys less in the future. Another reliable track record to note is that physical gold has always been a store of value and over time holds your buying power. In a time of such political and financial uncertainty, the ability to hold your wealth before it disappears is extremely relevant. It is also important to realize that in a good market, whatever market that may be, the best assets typically outperform. In a rising gold market, the three coins talked about above have historically outperformed commonly found gold products such as bullion bars or coins. The coins above are not allowed in a Gold IRA and let’s face it, are extremely rare and not affordable to many investors. The point of discussing store of value options in this market is simple, control your money while you still can. In times of financial uncertainly, crisis, turmoil, and free money, it’s a good idea to get money out of the banking system and financial markets until the dust settles. We will eventually come out of this, but it could take a decade. Not everyone has that kind of time, and not everyone is willing to risk all their money in the market casino. Call Midas Gold Group today at 480-360-3000 or 805-601-6000 and discuss your situation privately with an experienced trader. We are answering calls from 8 am–4 pm PST M–F. Leave a message if calling during non-trading hours and we can call you back the next business day. This is the quiet before the storm. Get ready and preserve as much as you can before it’s gone. Call Midas Gold Group today at 480-360-3000 or 805-601-6000. God Bless America, we are going to need it!