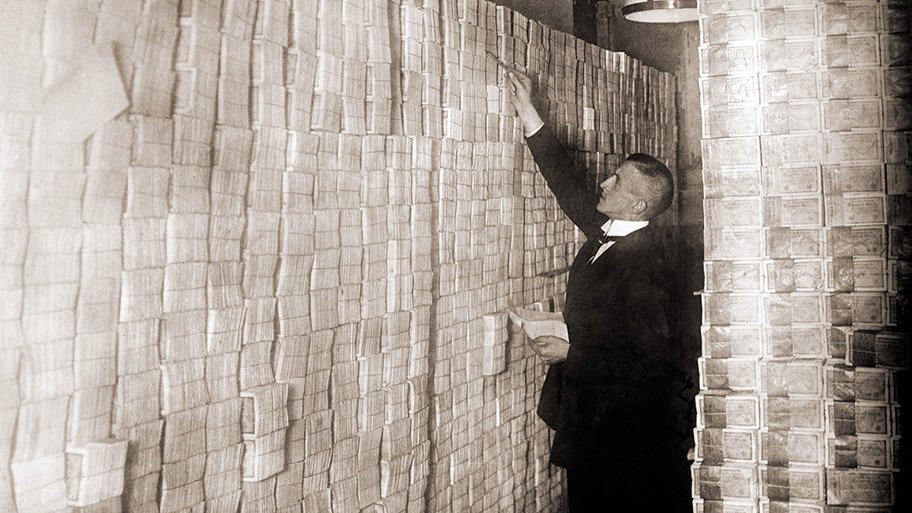 Hyperinflation during the Weimar Republic 100 years ago

Paper or fiat currency is nothing new in world history. China has a long history of printing intrinsically worthless currency dating back to the seventh century. In the 1400s the kingdom of Spain began printing paper to be used as money during military sieges.

If there is one thing that we can learn from history, is that all fiat currencies eventually fail. Further, that failure is generally a result of governments and central banks’ inability to restrain themselves from expanding the monetary base when the creation of money and wealth is as simple as running a printing press. Even today some global currencies are collapsing including Venezuela which is experiencing an inflation rate of nearly 40,000%. Even larger economies are experiencing hyperinflation including Argentina with an inflation rate of 59%. Turkey and Pakistan also have inflation rates of over 50%.

It might be hard to imagine the United States experiencing hyperinflation but ignoring that possibility is to ignore the lessons of history.

The Germans also believed that their currency would never become worthless in the early 20th century. However, that is exactly what happened and that is the path the US and the dollar may well be headed towards as we repeat the patterns of the German Weimar Republic.

To pay for the First World War, Germany suspended the convertibility of paper money into gold in 1914. German Emperor Wilhelm II and the Reichstag decided unanimously to fund the war by borrowing money. To get the money Germany issued bonds that were purchased by the Reichsbank and paid for with freshly printed paper money. Over the next four years, the money supply in Germany soared by 600%.

The owners of gold were the only ones to survive the oncoming mess.

Jump forward 100 years. Our government needed lots of money for the financial crisis and still does because of our do-nothing Congress has just awarded itself another 1.4 trillion-dollar deficit for 2020.

You should sit back for a moment and let this sink in;

The method our government and others have used to get the money they need over the last 10 years has been called quantitative easing by the Federal Reserve. Our government sells Treasury Bonds to increase the debt and the Federal Reserve expands the balance sheet to purchase the bonds and other assets. Eerily it is essentially the same process Germany used when it needed lots of money to pay for the First World War.

The US debt stands at $22 trillion and counting and deficit spending is showing no signs of slowing down and the deficit is not scaring anyone. This is a chronic problem that we are unlikely to “grow out of” with an increase in the GDP.

The bill will come due, it always does.

After Germany lost the war in 1918, it was left with debt it couldn’t pay off. When a government cannot pay off the debt it has the best thing to do is devalue the currency. Germany did exactly that. The mark was steadily devalued from 4.2 to 7.9 marks per dollar. Eventually, Germany had to pay off massive debts because of war reparations, they needed lots of money to essentially pay off creditors.

Leaving, guess who, the public holding the bag. The pain was extreme and the spiral towards chaos was swift. Only owners of gold were able to preserve their wealth as the oncoming crisis accelerated.

Under the London schedule of payment, Germany used the massive printing of banknotes to buy foreign currency to pay the debt. After the first payment to France, Germany failed to pay an installment on time in 1922. The mark plunged in value from 90 marks per dollar in the first half of 1921, to 330 marks per dollar at the end of 1921. In the first half of 1922, the mark stabilized at about 320 marks per dollar. Then inflation erupted into hyperinflation with the mark falling to 7,400 marks per US dollar by December of 1922 and the cost of living skyrocketed by a multiple of 15. Think about that for a moment.

Long ago the French philosopher Voltaire said, paper money always eventually returns to its intrinsic value-zero. A loaf of bread in Berlin that cost around 160 Marks at the end of 1922 cost less than a year later a loaf of bread cost 200,000,000,000 Marks. People were pushing wheelbarrows filled with cash to buy a loaf of bread.

In November of 1923, the US dollar was worth 4,210,500,000,000 German marks. A new bank, the Rentenbank, was set up and controlled by a new German Finance Minister. The new Rentenmark was introduced to replace the worthless paper marks issued by the Reichsbank.

The interests of creditors and debtors were the focus and the public’s standard of living index was deemed irrelevant.

Those who had the common sense to own gold to preserve their wealth survived. Everyone else was left holding the bag or should we say wheelbarrows filled with worthless paper bills.

Voltaire also said, Everything’s fine today, that is our illusion.

Unfortunately, it appears that we all are living our own slow-motion unfolding of a mess, considering that every paper currency since 1980 has lost 80-95% of its purchasing power including our US dollar.

What happens if the loss of purchasing power accelerates?

Recently many experts have said that global debt has expanded exponentially to $250 trillion. The next world crisis could cause a crash so severe and it could happen extremely quickly. The crises in 2008 took about three weeks to cause serious havoc as the wheels of the economy came apart.

Learn from history and preserve your wealth. Move some paper assets you have into gold before the wheels come off the cart. You can own the gold coins and bars and hold them in your hand. If you use gold for wealth preservation you push away risk rather than pushing the wheelbarrow full of worthless paper.