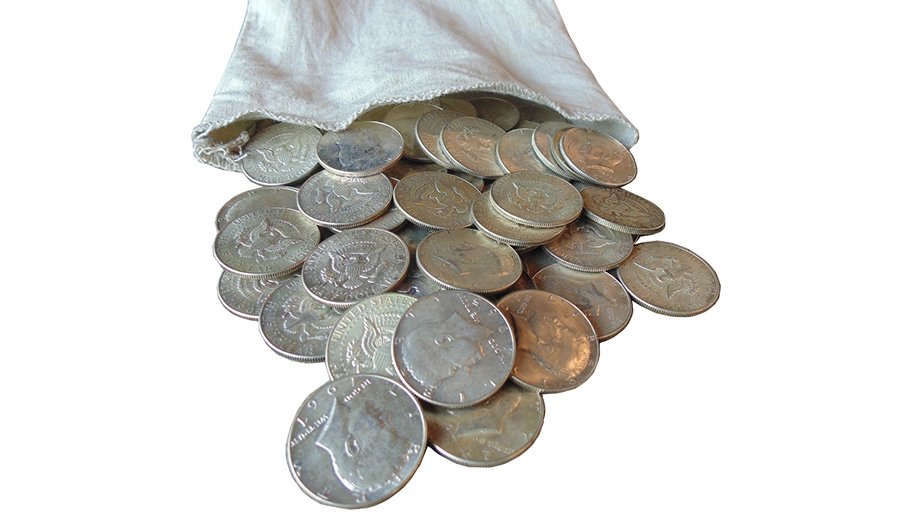 Many investors have not heard the term junk silver. Junk silver is a term frequently used by coin investors looking for different ways to purchase a store of value without paying collectible coin costs. Junk silver is not scrap silver and typically is nowhere near brilliant uncirculated condition. Junk silver bags are commonly purchased by survivalists and investors who are looking to purchase silver for possibly bartering reasons or to own coins in very small denominations. Junk silver bags are most commonly sold in $100, $250, $500, and $1,000 face value bags or canvas sacks. Face value is important in determining the cost to buy and the price to sell if applicable.

In this week’s article, we cover some of the more popular junk silver coins and their percentage of silver content in each. At Midas Gold Group, our clients typically give us an idea of how many US dollars they are looking to convert into junk silver. As a full-service dealer, we research the best bargains out there and do the rest. As a possible owner of junk silver, make sure you have the storage room necessary and the strong biceps to lug these heavy bags around. The cost of shipping is also a factor in very large quantities of these coins.

Junk silver coins are a finite commodity. Since the late 1960s, it is legal to melt down US junk silver coins. The fact they are no longer being made and many have been melted down over the years, there is value there. Although these coins are still legal tender, their real value exceeds that. A pre-64 quarter in horrible condition, because of its silver content, is worth roughly $4 based on today’s silver price.

The importance of this article is to stress the fact that every investor is different. A good silver dealer will tailor a plan for each investor based on their needs and wants. What are you looking for silver to do for you? Are you looking for appreciation or barter ability? Junk silver is a store of value, it’s readily divisible and fractional, junk silver has never been confiscated, it’s affordable, and has the potential to increase in value if the price of silver goes up in the future. Junk silver can only be purchased with liquid funds and is not allowed in an IRA.

Call a Midas Gold Group trader today at 480-360-3000 or 805-601-6000 and ask what is available in the junk silver inventory. We are quickly approaching a cashless society and coins and change are getting shorter in supply and harder to come by. Your financial privacy and options to hold your wealth are getting fewer by the day. Get some of your funds out of the bank before you are forced to have a digital wallet. The world is changing and our money is changing with it. Do something about it while you can. Call Midas Gold Group today at 480-360-3000 or 805-601-6000 and do something about your financial future today.