By simple definition, inflation is a general increase in prices and a fall in the purchasing value of money. According to the Bureau of Labor Statistics, the annual inflation rate in the US is 2.6% for March 2021. The annual inflation rate in May of 2020 was .1%. Inflation is already here in the real world. According to the Bureau of Labor Statistics, the Bureau of Economic Analysis, and the ICE Exchange, we have already seen tremendous price increases recently. Bacon is up 11%, bread is up 11%, chicken is up 10%, gasoline is up 22%, corn is up 44%, cotton is up 10%, coffee and eggs are up over 7%, and appliances are up 15%. Construction company suppliers are warning that a 20% increase in lumber, drywall, aluminum, and steel is expected shortly. The price of lumber has almost tripled in the last year. With more monopoly money printed by the government on the way, this is only the beginning.

JP Morgan and Bank of America are warning of Persistent Inflation 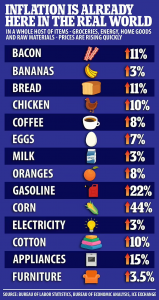 Recently in February the head quant at JP Morgan, Marko Kolanovic, stated that we would see a major move higher in commodity names. Many portfolio managers will shift their positions to prepare for the risk of more persistent inflation. Since 2010, the Fed’s balance sheet has nearly quadrupled to $7.8 trillion. The new US administration just this year is proposing $6 trillion more of new stimulus measures. Mr. Kolanic is very concerned that many 30-year-old money managers have never experienced a rise in yields, commodities, value stocks, or inflation in any meaningful way. Kolanic warns that most portfolios are now vulnerable to a potential inflation shock.

Last week Bank of America said Buckle up! Inflation is here. They noted that the mention of inflation jumped approximately 800% during recent earnings calls versus last year by major corporations. Bank of America said that this at least points to a period of transitory hyper-inflation ahead. Inflation risk was more prevalent in materials, consumer sectors, and industrials. We contend that Covid-related disruptions have affected production and supply chain logistics. America’s largest companies are warning that higher commodity prices will be passed on to consumers. We continue to contend that Covid has exposed the already existing debt problem. A debt problem that is not fixable, just one that is getting ready to implode. The Fed said it isn’t worried about recent price increases. You don’t have to worry when you can magically print money out of thin air. 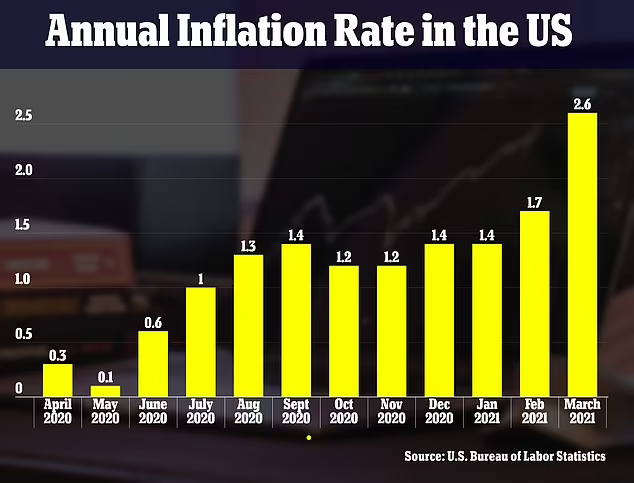 Last Saturday, Warren Buffett held his annual shareholder meeting. We will quote Mr. Buffett as the Oracle of Omaha says it best.

“We are seeing very substantial inflation. We are raising prices. People are raising prices to us and it’s being accepted. We’ve got nine homebuilders in addition to our manufacturing housing and operation. The costs are just up, up, up.”

It seems that everyone is recognizing the effect of all this money printing except the ones at the control panel. Maybe it’s because there is no other choice but to expand credit, government spending, and the money supply. Central bankers are fools with an addiction to money printing. Politicians and bankers are only too happy to keep pushing the money computer key. This fiat currency experiment started in 1971 is unraveling, draining our buying power, and setting up the mother of all credit bubbles to implode. Our paper currency will be worth next to nothing. Get your wheelbarrow ready.

The US Dollar Has Always bought less since the 1930s

In 1933 by Executive Order, President Roosevelt enacted the gold confiscation. Up to this point, every US dollar was backed by a certain amount of gold. The economy needed stimulus and the government needed to print a lot more paper currency. On March 6, 1933, he issued Presidential Proclamation 2039 that forbade the hoarding of gold or silver coin or bullion or currency, under penalty of $10,000 and/or up to five to ten years imprisonment. It also was a nice way to buy the public’s gold at $20.67 per ounce, value their confiscated gold at $35 an ounce a year later, and gain control of the printing of much more currency. According to the Bureau of Labor Statistics and the Morris County Library of Historic prices, this has caused a significant loss in our US dollar buying power. $1 in 1913 bought 30 Hershey’s chocolate bars, 10 rolls of toilet paper in 1929, 20 bottles of Coca-Cola in 1944, 10 bags of pretzels in 1953, 17 oranges in 1971, 2 boxes of crayons in 1987, 4 grapefruits in 1997, 2 lemons in 2008, and it buys a small cup of coffee at McDonald’s in 2020. The dollar will always buy a lot less in the future as long as we are on a fiat currency system where the amount of money printed is infinite. 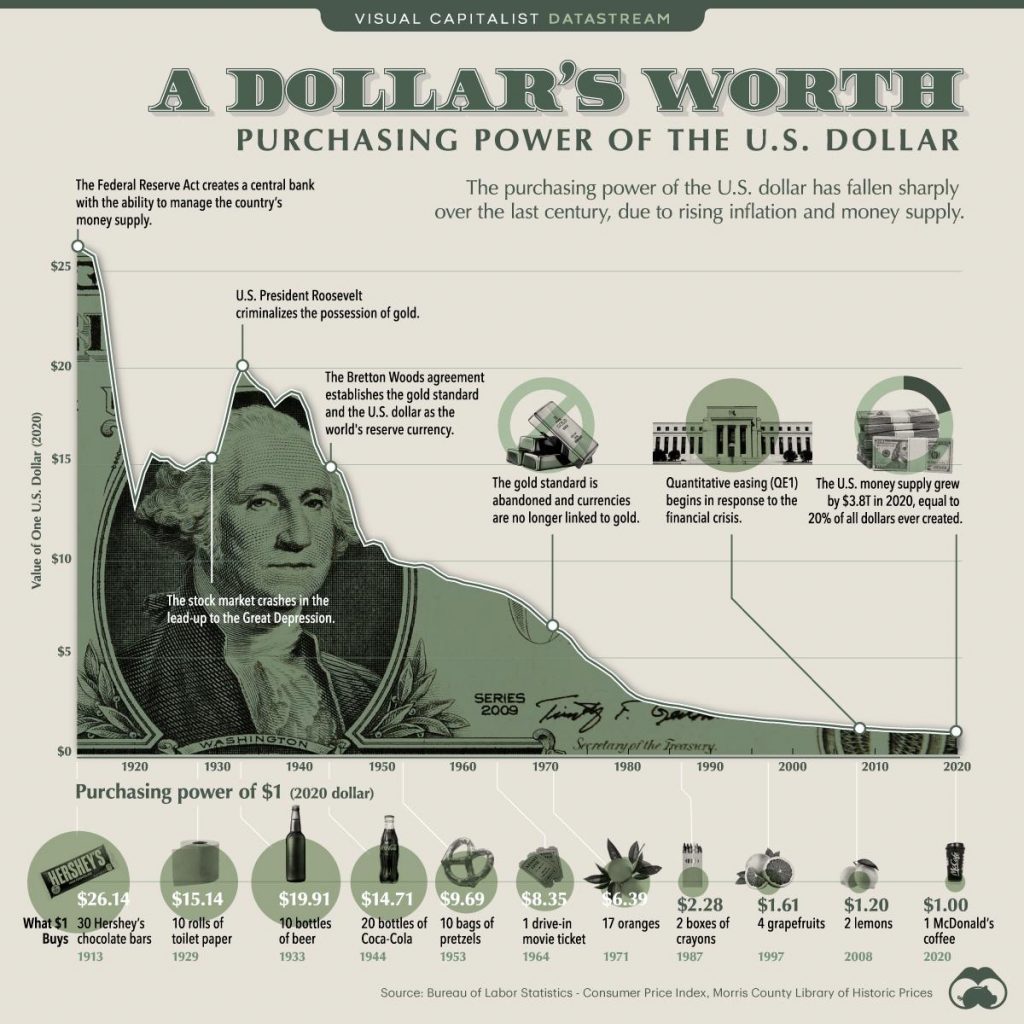 Many parts of the world have experienced significant inflation and hyperinflation throughout history. The printing of money and interest rate manipulation causes this time and time again. Let’s look briefly at history and bear with me for a minute. Yes, these numbers are real according to Peter Bernholz in Monetary Regimes and Inflation. From 1920–1923 Germany experienced 29,525% inflation. From 1942–1945 Greece experienced 11,288% inflation. Hungary experienced 12,950,000,000,000% hyperinflation from 1945 to 1946. Yugoslavia saw 313,000,000% hyperinflation from 1992 to 1994. We aren’t even mentioning the other 24 regimes that experienced 53% to 4,208% inflation since 1920. Some of these regimes would be the Soviet Union, China, Brazil, Taiwan, Ukraine, and Poland. It’s silly to ignore the possibility of the United States being on this list for future generations to see and for us to experience.

Let’s look at another fact from history. Physical gold does very well when inflation is greater than the 10yr yield. Presently the 10yr yield is 1.6% and inflation is 2.6% according to the Bureau of Labor Statistics. We all know that inflation is higher than that. The government can’t afford interest rate payments on their debt if it goes up too much. The guy driving the Mars rover even knows that. He also knows or should know, that this yield-to-inflation relationship existed in the late 70s and late 2007–2009 periods when the price of gold skyrocketed. In 1930 there were two forms of money, gold coins, and paper. A $20 bill and a $20 gold piece were both worth $20 and both bought a man a nice suit. In 2021 that $20 gold piece worth over $2000 and still buys a man a nice suit. The $20 bill can’t even buy a nice tie. Physical gold keeps your buying power, paper currency does not. What the heck are you waiting for? Start buying physical gold today or add to your hoard while you still can.

May 11, 2021
Federal Reserve, gold, hyperinflation, inflation, US debt, US dollar