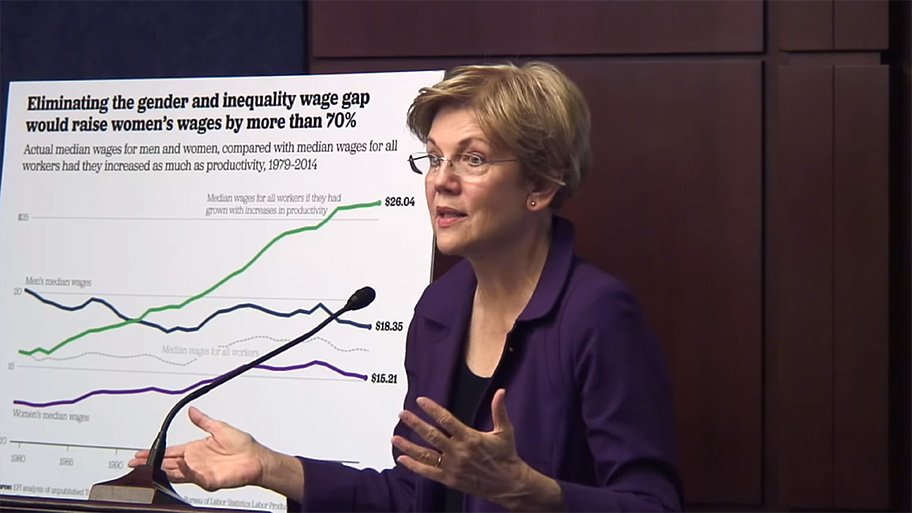 What Happens if Elizabeth Warren Wins the Election?

The election season is just around the corner and depending on who wins the election the impact on you and your finances, your savings and your retirement plans can be breathtaking. What if a candidate such as Elizabeth Warren wins the Presidential election in 2020?

Senator Elizabeth Warren recently laid out her plan to pay for her ‘health care for all’ plan. The plan includes massive tax increases on businesses and the wealthy to pay for over 20 trillion dollars in new federal spending and she also wants the states and local governments to pump in over six trillion dollars to make the plan work.

Why does this matter to you?

The State and local governments would probably pass on that cost to you, and you know what this means. Slower growth, causing economic pain and job losses and likely bust the stock market bubble the Federal Reserve and Wall Street banks have created over the last several years.

Gold remains the asset of choice and your only hope.

Wall Street is starting to get worried. Elizabeth Warren has made fighting corporate greed and corruption the main point during her campaign, one common thing she has said is Our democracy has been hijacked by the rich and the powerful. With comments like this at some point, you know that a lot of worries will eventually show up on Wall Street about how a reckless Democrat if elected could bring the whole economy to a standstill. The process has started.

Recently some Goldman Sachs researchers have said the tax hikes proposed by Ms. Warren and others may lower corporate earnings by over ten percent, lower corporate earnings mean layoffs and so on. That means the Federal Reserve will keep printing money and lowering interest rates to keep up with their mandate. For instance, Senator Warren’s plan includes new taxes for the top 1 percent of the wealthy households, she wants to tax investment gains annually instead of when the investments are sold, and she plans to impose taxes on stock trades. She also wants to confiscate more money by making employers pay the federal government the same amount of money they are currently spending on their employees’ health care, this comes to about eight trillion dollars over a decade.

With low-interest rates and looming inflation, the most practical way to preserve your purchasing power will be by owning physical gold and silver.

Buying gold under this scenario will protect your wealth and the best way is to buy the physical gold or a Gold IRA.

All the private debt, government debt, derivatives, unfunded liabilities, and shadow banking loans have exploded in the last 10 years. If you include Wall Street derivatives that none of us know about, the amount is so massive your head will spin and that is really scary.

Senator Warren’s Stop Wall Street Looting Act mandates that private-equity firms guarantee the debt of any companies they buy. That would make corporate investments far riskier and likely inhibit Wall Street’s ability to make profits for investors, leaving many zombie companies who survive on the debt bubble to flounder like a fish out of water and cause massive company defaults.

Gold would likely surge higher and be your best bet to offer some stability to your portfolio. The price of gold rose from a low just around $700 per ounce to about $1,900 during the aftermath of the last bubble that Wall Street and the Federal Reserve created. Gold is now trading around $1,400 to $1,500 an ounce if history repeats itself that level is much higher.

Wall Street and politicians have a habit messing things up more often than they want to admit and whomever they blame is not the issue, the issue is what happens to you.

Now is the time for you to think about the unthinkable and make plans, just in case the unthinkable occurs. Investing in gold will offset the risk caused by massive financial engineering since the world left the Gold Standard back in the 1970s.

Investing in precious metals like gold allows investors to offset the risk posed by Central Banks, corporations, a banking system and politicians that are using a vast amount of financial engineering. Gold can provide your IRA with rock-solid backing. When you buy physical gold, you can hold the gold bars or coins in your hands and no one can take it from you. A portion of your nest egg in gold gives your family the control and protection it deserves.