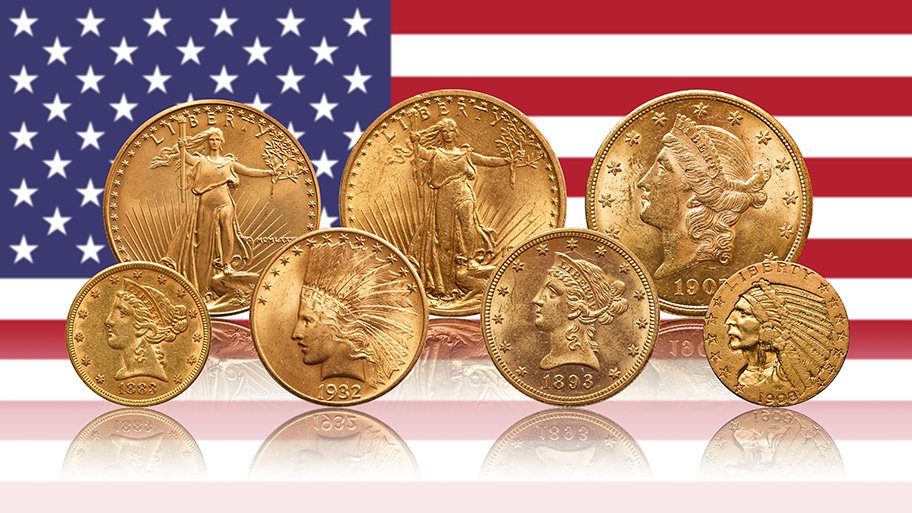 Brief History of Gold in the United States

From 1879 to 1933 the United States was on a gold standard. There were two forms of money at the time. Paper bills were convertible into gold, and gold was easily converted back to paper bills by the bank. A person could have a $20 bill in their pocket as well as a $20 gold coin. Both forms of money were worth $20 and could buy a man a nice suit. If we look at that today the $20 gold coin is worth over $2,000 and can buy a man three nice suits. The $20 bill on the other hand can buy a necktie. Money in the form of gold held its purchasing power. Money in the form of paper did not.

Fiat money is defined as a type of currency that is not backed by any commodity such as gold or silver. Fiat money is typically declared by a decree from the government to be legal tender. Fiat currency lacks intrinsic value. Our money’s worth is only realized if the owner of an item accepts your offer. Fiat currencies derive their value largely through the trust in the governments that issue them. People are losing trust in the form of money that is called the US dollar.

FDR in 1933 weakens the gold standard for the US dollar

Did you ever see a $100 gold certificate? Before 1933 a creditor could demand payment in gold when using this bill. On June 5, 1933, this all changed when Congress enacted a joint resolution nullifying the right of creditors to demand payment in gold. This resolution was in response to the public hoarding of gold due to the Great Depression in the 1930s and to prevent a run on the banks. Consumers lacked confidence in the economy and the Keynesian economic theory would be to inflate the money supply to fight off an economic downturn. Britain did something similar with gold in 1931.

FDR ordered all gold coins and gold certificates in denominations of more than $100 turned in for other money by Executive Order 6102. Persons were paid $20.67 per ounce for the gold that was turned in. The US money supply needed to be inflated and this wasn’t possible if so much gold was needed to back paper money. The punishment for not turning in your gold was a criminal penalty of a $10,000 fine or 10 years imprisonment or both. The gold price in 1934 was increased to $35 per ounce via the US Gold Reserve Act by the 73rd US Congress. This immediately increased the Federal Reserve’s balance sheets by 69%. This allowed the Fed to further inflate the money supply but reduced the amount of gold backing each dollar from 1/20th of an ounce to 1/35th of an ounce.

The economy of the Western World was governed by a system established in Bretton Woods, New Hampshire. The Bretton Woods conference created rules and designed institutions to prevent a repeat of the Great Depression. The monetary system was based on fixed exchange rates from 1945 to 1971 to try and aid trade policies from currency devaluations. The US dollar was fixed to gold at $35 per ounce to provide an anchor for the system. The International Monetary Fund was established to deal with fluctuations in currency values resulting from the balance of payment problems.

In early 1971 President Richard Nixon admitted he was a Keynesian. Nixon had a strong desire to stimulate the economy. Nixon felt politicians must be able to do something in an economic downturn. He felt inflation in the early 70s could not be contained using traditional monetary and fiscal tools. He felt the government needed to be in control of wage and price controls. At the time Britain also demanded to exchange $3 billion of US dollars it ran from a trade surplus for gold. Citizens couldn’t hold gold, but governments were permitted to. The United States had only about $10 billion of gold at the time, so $3 billion was a big chunk. What if other countries demanded gold too? Congress was also advocating devaluing the dollar.

On August 15, 1971, Nixon addressed the nation announcing the program of wage and price controls, closing the gold window, and new tariffs on imports. Our US dollar was now backed by zero gold. All fiat currencies were allowed to float freely against one another. The fiat currency experiment had started all thanks to Executive Order 11615. Nixon and the Fed felt they could keep interest rates low and continue to provide monetary stimulus to the economy because of the upcoming 1972 election. As we all know, some inflation in the early 70s spiraled out of control into the late 70s. It wasn’t under control and not temporary. This sounds eerily familiar to what we are seeing today. The big problem is the whole world is doing it.

President Gerald Ford takes over for Nixon in 1974

President Gerald Ford was the only president and vice president never to be elected to office. Inflation in 1974 was at a 10.9% rate. If we calculated our inflation today in 1974 terms, it is much higher than what they are saying inflation is. Inflation is probably 13% to 15% minimum. There were soaring oil and gas prices. Inflation started in 1970 and peaked in 1980. Folks we have a long way to go today. The pie is a whole lot bigger now with much more fuel for the fire.

On August 15, 1974, Ford signed a bill allowing American citizens to buy and sell gold after December 31. This is the first time in 40 years that Americans could own gold again. There were not any gold coins made by the US Mint from 1933 to 1985. New gold owners in 1974 would frequently buy Gold Krugerrands and Gold Pesos before new gold products would come to the market. The Gold American Eagle was produced in 1986 and many other gold products would follow from other government mints like the Canadian Maple Leaf, the UK Britannia, and the Australian Nugget. The US Gold Buffalo was introduced in 2006. Gold bullion is allowed in IRAs since 1998.

It’s amazing how the fiat system has evolved. Incredibly, American citizens were not allowed to own gold from 1933 to 1974, but governments and central banks were. They continue to push paper fiat money down our throats while they hoard all the gold in the background. Helicopter money and monopoly money, until it has no value, is that what they want? The government and the central bank needed to be more in control in 1971? We all know those entities never get it right and always overspend for everything. Everything that has happened since 1933 financially means one thing: paper money loses purchasing power and physical gold holds it.

There is way too much paper money and debt out there. There is too much that can go wrong with this debt. There is too much that people don’t understand, and this includes the elected officials making the decisions. You can’t fix a debt problem by adding more debt and spending more. Investment houses and corporations are interested in one thing and one thing only, profits. And they will gamble and take out as much leverage as possible before it all blows up. They already have their billions and millions. You better care about what you have today and move some of that toxic paper into physical gold that you can hold.