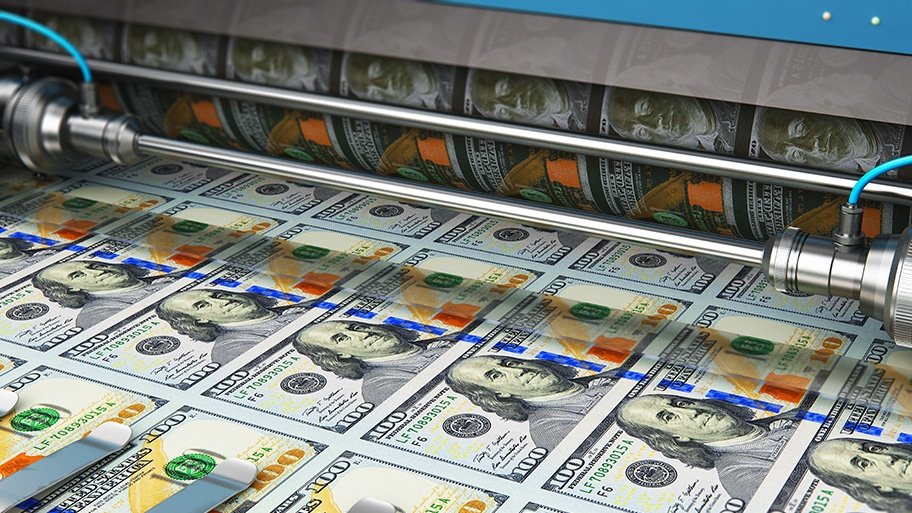 Fed Has No Option but to Continue Printing Money

Many economists are still predicting a V-Shaped post Coronavirus shutdown. The rebounding stock market would seem to support the V-Shaped theory. However, others predict a real turnaround could take a decade. The drastic recovery in the stock market is not based on strong market fundamentals. The unemployment rate at nearly 20% is drastically higher even than at the heart of the recession of 2008. Rather, the stock market recovery seems to be due to trillions of dollars in stimulus and asset purchasing funds being printed out of thin air and needing a place to go. This is neither a healthy nor sustainable recovery.

Fed’s hands are tied, the only tool is to print money

Traditional interest rate policies designed to bring steady predictable inflation and stable currency seem to have been thrown out entirely with a simple mandate to pro of the economy at all costs. Rates are already near zero. When the financial crisis in 2008 started, the Fed had about four hundred basis points of room to lower rates. This does not exist today as interest rates have been kept artificially low in the last decade. The only fiscal tool available today is to print money. The whole world is printing money and holding markets up. The main central banks are ruling the financial world. They are printing money then using that money to buy paper assets including debt instruments. This is to provide liquidity and hold the markets up in the hopes that eventually the economy can return to self-sustainment. Unemployment is also global. It’s not as if only a small part of the world is struggling economically. Hundreds of millions are unemployed globally. Here in the US, nearly 20% of the workforce is unemployed. Many of these lost jobs will never come back. Many small businesses that are so vital to the economy will never be able to reopen.

US dollar and fiat currencies under attack

Since 1971, we’ve had a 49-year decline of a real economy and continued lost value in paper currencies. US debt has gone up 65 times since 1971. US debt is now 26 trillion, from 800 billion when Reagan took office. Excessive debt is a global problem. Global debt in 2006 was $120 trillion and is now over $270 trillion with record stimulus continuing. How delusional does one have to be to think a debt problem can be fixed by issuing more debt? You can’t fix a credit problem by issuing more debt.

The total global stimulus since Covid-19 started is $18 trillion. The US, EU, Japan, China, Italy, France are all printing money to deal with the virus and bad economies. Steven Roach, a world-leading economist, says the US dollar could see a 35% drop soon. Fiat currencies have been allowed to float against each other since 1971 backed by nothing but a promise. There isn’t one strong fiat currency today in the world. How much longer will the consumers of the world trust worthless, paper, printed currencies?

Stocks go down faster than they go up

25% of the S&P 500 is in 6 stocks. I guess Facebook, Amazon, Netflix, Google, Apple, Microsoft will just go up forever. Well, Facebook had a rough week due to advertisers pulling ads. A guest on a major business television network said well I guess that business will go to Google now. Maybe a better answer would have been this could be a major cause of concern as the indexes are so heavily weighted towards those big-cap technology names.

Government, corporate, and consumer debt is a serious problem. Domestic consumers drive 70% of the US economy. Eventually, the free handouts will be over. Eventually, car notes, rents, and mortgages will have to be paid. Eventually, credit cards become maxed out. This takes time to play out and is not immediate, but eventually, the bill collectors will come calling.

Bad loans are surging and CLOs (collateral loan obligations) can be a huge problem for banks as discussed in previous articles. Jeremy Grantham, who called 3 financial bubbles, was asked recently what level of exposure investors should have to US equities… I think a good number now is zero — and less than zero might not be a bad idea if you can stand that. The writing is on the wall folks. The warnings are loud and clear. Maybe hoping things will be OK is not the best course of action at this particular moment in time.

Gold continues its 18-month climb and currently stands at an 8-year high. Private and institutional investors continue to flock to gold as central banks show little regard for the stability of their currencies. From a technical perspective, strong close the second quarter would be very bullish for the price of gold. Midas Gold Group has remained bullish on gold in recent years. However, we never could have imagined the economic events that have shaped 2020. We have witnessed monetary policies including massive government stimulus and bailouts that we would expect to see in a communist country like Venezuela, but not in free-market economies like the US. There is a storm brewing that will threaten the stability of the US dollar and diversification into a physical asset like gold appears increasingly vital for long-term financial protection.

Yes, trillions of dollars can delay the inevitable. Yes, everything goes through a cycle. Yes, every opportunity is unique in its way. But let’s be real folks, someday this financial engineering and reckless behavior have to matter. Tremendous paper wealth was created over the last twenty years. Many powerful empires throughout history came tumbling down due to a currency collapse. Advisors, bankers, television, and stockbrokers have done a great job convincing the investing public to stay the course. Not everyone has twenty years to go through the next collapse Here at Midas Gold Group we believe the next decade will be one of wealth preservation. Cash, stocks, bonds, and property are all toxic at this point in the cycle. We are not financial advisors and we don’t claim to be. History does repeat itself and we need to listen and prepare. Physical gold has been one asset that has stood the test of time as a store of value. Gold was $35 in 1970, $200 in 1999, $800 in 2006, $1,900 in 2011, and now stands near $1,800. Seems like a third-grader could understand that gold has kept up with the cost of living over time. No, it’s not sexy or cutting edge technology, it’s just dependable. In such a time of uncertainty, is it really a good idea to have all your assets in such risky assets? Call Midas Gold Group today at 480-360-3000 or 805-601-6000 for a no-obligation free consultation. Traders are available from 8 am PST M–F. Find out if a gold allocation can make your war chest bulletproof. Sometimes it’s better to hide somewhere safe than to constantly face the music. Musical chairs is a fun game to play until all the chairs are taken and you are left standing.