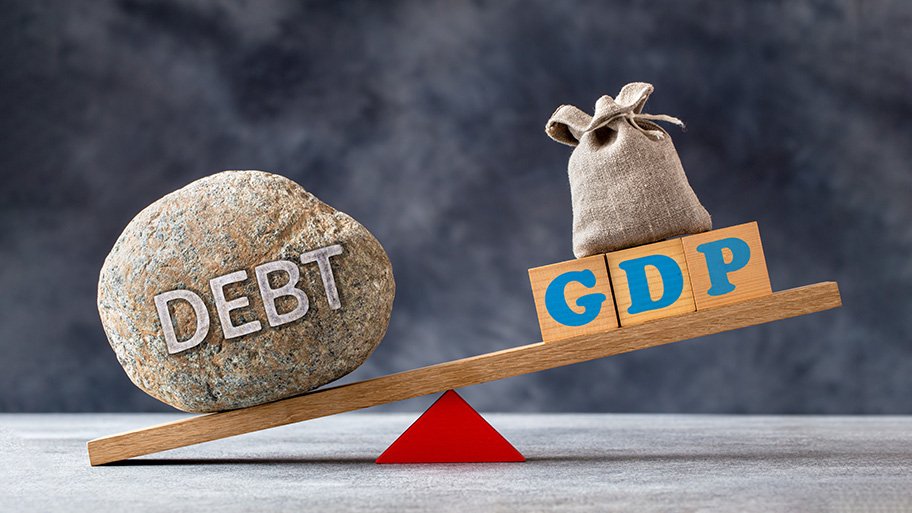 This Enormous Debt Will Implode Our Financial System

After the internet bubble in stocks burst in 2000, the Fed used a big decrease in the Federal Funds rate to stimulate the economy. After stocks crashed for over two years, the investment community took advantage of cheap money to build up the housing market. The housing market was then brought down by subprime lending around 2007 as the economy cooled leading up to the Great Recession and the ensuing global recession in 2009. In 2009 the Fed started Quantitative Easing 1. In 2011 the Fed started Quantitative Easing 2 and Operation Twist. Right before 2013, Quantitative Easing 3 started. These are all fancy names for printing money out of thin air to hold the markets up. The Fed started its bond-buying program in September of 2019 as net purchases became positive again. The last 20 years have been built up and held up by enormous debt. This is an unfixable debt that will destroy our dollar and bring most assets eventually to their knees. The real scary part is that the whole world is doing it.

Central banks of the world have gone wild

The main six central banks of the world are the Fed, the ECB, the Bank of England, the Bank of Japan, the Peoples Bank of China, and the Swiss National Bank. These central banks use debt and interest rates to stimulate and cool down the economy. Well, you can throw interest rate policy out the window to stimulate the economy. Interest rates are already low, negative in some places. Since 2006, the four biggest central banks have expanded their balance sheets from $5 trillion to over $29 trillion. We see printed money by governments out of thin air, central banks buying these assets and putting them on their balance sheets, and the continuing devaluation of all fiat currencies. These are assets that have been created by the stroke of a computer key. These assets are poison, toxic, and worthless. The central banks are adding to this massive debt bubble that will implode our financial system. The pace is historic and exponential.

Global debt is spiraling out of control

There has been massive wealth creation over the past couple of decades. Some of it is due to innovation and good business. Most of it is due to debt. There is more government, corporate, and consumer debt than ever. With all other stimulus tools basically out the window, the only thing left is more debt. Global debt in 2000 was $80 trillion. Global debt in 2006 was $120 trillion. Global debt today is approaching $280 trillion. Global debt is expected to be $360 trillion by 2030 according to the IIF, BIS, and IMF. Tax revenues are nowhere close to offsetting this. Now more and more debt is needed to just see a little temporary movement. The system needs to be fed bigger doses of debt to get a little stimulated. The global financial system is an addict, an addict only able to survive temporarily by getting another hit. An addict only survives if they quit completely. If the world stops printing, all the markets get crushed. That is not an option at this point. It will take tens of trillions more to keep things propped up until they aren’t. As the world keeps printing at exponential rates, we get severe currency devaluation. This enormous growing global debt is not a fix. This global debt will implode our financial system.

The US debt is going parabolic

According to Investopedia, the national debt level of the United States is a measurement of how much the federal government owes its creditors. Specifically, the national debt is a term referring to the level of federal debt held by the public, as opposed to the debt held by the government itself. Since the US Government almost always spends more than it takes in, the national debt continues to rise. US tax revenue in the US has gone up six times since 1981. US national debt has gone up thirty-one times since 1981. President Reagan took office with $900 billion in debt. President Biden took office with $28 trillion in debt. Does anyone realize it would take 887,000 years to count to 28 trillion? How on God’s good earth can this make sense? How can this possibly end well? To every investor out there, it won’t. In 1978, US debt to GDP was about 30%. Today it’s approaching 130%. US debt has exploded by close to fifty times since the early 70s, while GDP is up less than twenty times. US debt will probably be $50 trillion by 2025. The Fed has over $7 trillion of assets on its balance sheets now. The Fed had $830 billion in 2006 on its balance sheet. The government prints money out of thin air, pays interest on it, and sells it to the Fed to put on their balance sheet. Our government thinks they have quite a nice little game going. The real news is that this debt will matter and is toxic. This debt poison is spiraling out of control and picking up speed. All this US debt and much more on the way will implode our financial system as we know it.

In 2011 the former Chair of the Federal Reserve Alan Greenspan said, The United States can pay any debt it has because we can always print money to do that. So there is zero probability of default. Another former Fed Chairman said The US government has a technology, called a printing press. It allows it to produce as many dollars as it wishes at essentially no cost. Our Treasury Secretary, Janet Yellen says the trajectory of the US national debt is “unsustainable.” She said this in December of 2020. How many more trillions have been suggested since then? A sound financial plan today based on sound principles is a must. If you are fortunate enough to have a substantial portfolio or cash hoard, protect it at all costs. If you want to speculate it all based on the ongoing unfixable debt, which is your choice, you will have to explain the consequences to your family. This enormous debt will implode our financial system and sound money principles are in order. Physical gold has returned 63% in the last five years. Physical gold holds your buying power over time. Financial defense is based on moving the appropriate amount of physical gold into your possession before the Wizard of Oz is revealed behind the curtain. That curtain can fly open at any moment.