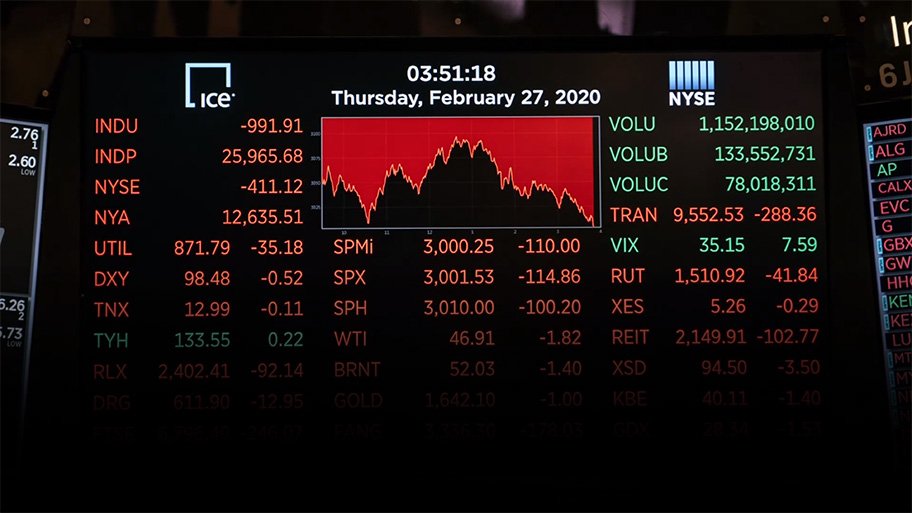 Coronavirus is spreading around the world and investors are fleeing equities

The COVID19 Coronavirus is making its way around the globe. The US stock market had its worst week since 2008. World stocks lost over $5.1 trillion in market cap last week. The S&P Banks Index saw the biggest 6-day collapse since the peak of the financial crisis over a decade ago. Treasury yields were all lower, including the 2Y which saw its biggest monthly decline since November 2008. The entire Treasury curve is now trading below the Fed Funds rate. The dollar fell and commodities even took a big hit. Twenty-three of the most reputable Wall Street research houses all have S&P 500 2020 targets over 3000. Yes, everything goes through a cycle. Yes, equity indexes had a great decade after the last financial crisis. Investors are left asking themselves if they truly want to risk all they have made in equities during the last run. With the coronavirus causing so much uncertainty, more downside could be expected with occasional relief rallies. It seems a bit early to suggest US recession, but it certainly feels we are dangerously getting closer. With stock valuations at historic highs, perhaps investors have been looking for a trigger to take profits in stocks before a recession. Perhaps the Coronavirus is only bad flu and is giving the trader the incentive to sell an overvalued market. On the other hand, perhaps the virus is far more deadly than is being reported and the world could be facing massive quarantines and massive economic disruption. Either way, as precious metals traders, we are seeing a massive influx of investment capital from equities moving to the safety of gold and silver.

Federal Reserve Chairman Jerome Powell issued a statement saying the US central bank would act as appropriate and monitor the coronavirus impact, an announcement that raised expectations for monetary easing this year. The FEDs stimulus plan started in September 2019 has failed. Trump repeated his request Saturday that Federal Reserve should lower US interest rates further. The Fed should be the leader, not a follower among the major industrial nations and have a looser monetary policy. Middle-income tax cuts are being promised in the not too distant future. This boom and bust cycle is really getting old. How many times can good Americans see their accounts artificially inflated and then see it decimated? All markets are manipulated to a degree. It would make a lot of sense for investors to see the writing on the wall. 1990 to 2000 was a great decade for stocks. 2000 to 2010 was a great decade for gold. 2010 to 2020 was a great decade for equities again. Central banks around the world continue to talk about easing and printing. Easing and printing leads to devalued currencies. Most currencies have lost 80% of their buying power since 2000. If we look at the prices of everyday goods versus the CPI Adjusted Price, of course, our dollar buys less every year. The data that the government puts out is out of touch with what is actually happening. I see it everywhere when I go out to lunch and pay my monthly bills. This is going to be far more problematic in the future with the sheer amount of funds and quantitative easing the Fed has pumped into the economy since 2009. If this strategy worked, Zimbabwe would be the wealthiest nation in the world. We all know how that turned out.

The debt situation in the world is not fixable

The world is approaching another failed monetary demonstration. Central banks have completely destroyed the global financial system. The printing press can just print money or digits whenever they feel that there is a need. The FED, ECB, BOJ, and PBOC are all in this wild fiasco together. Just since the last crisis started, central banks have caused a doubling of the amount of debt outstanding in the world from $125 trillion in 2006 to $260 trillion today. $135 trillion has just been created out of thin air. It’s like pulling a rabbit out of a hat. According to Matterhorn Asset Management, in 2006, global GDP was $51 trillion and debt $125 trillion which was 245% of GDP. Today GDP is $87 trillion and debt $260 trillion. That means the world has achieved an increase in GDP since 2006 of $36 trillion but had to print $135 trillion to achieve this which is almost 4 times the increase in GDP. So for every dollar of GDP increase, $4 had to be printed. The system is running on fumes. To pump the economy with worthless currency and notes isn’t going to fix anything. Eventually, the debt will implode. The assets backing this debt will implode. By keeping interest rates artificially low or even negative won’t give us a permanent fix. Massive debt will be the answer for most of us. Government and central bank action will again create massive wealth for the few. Central banks are now facilitating the biggest money printing exercise in history to fight for their survival as well as the survival of the financial system. Governments are drowning in debt that will never be paid back. The more money printed the more bankrupt our world financial system will become. As history shows, all paper or fiat money has without fail always become worthless.

We just witnessed an awful week for almost every asset class. Even gold took a hit and closed February with a slight loss after a great first three weeks in February. True wealth is gold in a physical form stored outside the financial system. Any asset within the financial system is someone else’s liability. Don’t be an investor and hold a paper claim with multiple counterparty risks. Gold is the best hedge against property bubbles, credit market failures, stock market crashes, devalued currencies, and a collapse of other inflated assets. Based on money supply gold today at $1,600 is as undervalued as it was at $300 per ounce. Call an experienced gold trader today at Midas Gold Group and talk about your concerns and possible solutions. Traders are available from Monday to Friday from 8 am to 4 pm PST. Call 480-360-3000 or 805-601-6000 to schedule a confidential phone consultation or schedule an in-person appointment today. The best time to move into gold was 20 years ago. The next best time to move into gold is today.