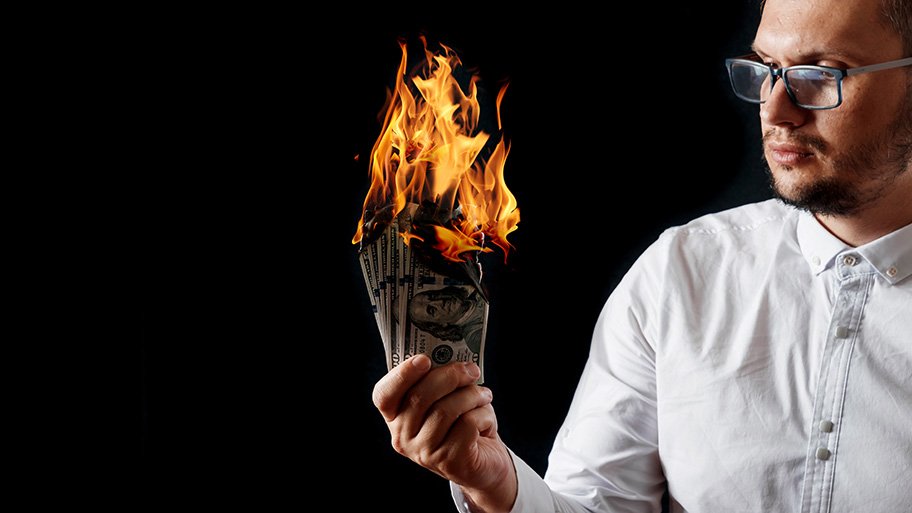 The Dollar Is Doomed

Benjamin Franklin’s notorious quote stated, … nothing can be said to be certain, except death and taxes. We would argue that there is one more certainty: our dollar will always buy less over time. The US national debt stands at $28.3 trillion and is increasing by the second. The USDebtclock.org jumps keeps clicking away in the wrong direction. Debt per citizen is currently $85,039 and $225,310 per taxpayer. US Federal tax revenue stands at roughly $3.5 trillion, while revenue per US citizen is $10,498. US Federal debt to GDP in 1980 was 34.59%; in 2000 it stood at 57.78%, now US Federal debt to GDP stands at 127% and climbing. This unpayable debt has created the mother of all debt bubbles. This debt has to matter someday and will cause our debt to implode. Our US dollar has nowhere to go in the long run except down. The inflation in the news lately is the result of the debasement of our paper currency. This has been going on for decades, and much more is to come.

Since 1971, US debt doubles roughly every eight years

In 1971 the fiat currency experiment started. All fiat currencies were allowed to float against one another no longer backed by any gold or silver. Central banks were now in a position to print unlimited paper money out of thin air. US debt has increased 55×, while GDP has increased 21× since then. Global debt stood at $80 trillion in 2000, $120 trillion in 2006, and over $280 trillion today. US debt stood at $900 billion in 1980, $2.6 trillion in 1988, $4 trillion in 1992, $5.7 trillion in 2000, $10 trillion by 2008, $20 trillion by 2018, and over $28 trillion today. By normal calculations, we should see a US debt of $40 trillion by 2028. We are not in normal times. We are in a period of exponential global money printing and debt. All fiat currencies continue to be debased as the world prints more money and take on more debt. All paper currencies including the US dollar will buy less in the future. As the money supply continues to expand exponentially, the US dollar will buy less possibly much less in the future.

Biden’s budget will continue to drown Americans in debt

This week there was a lot of talk concerning the Biden budget. A 25% increase in spending is being thrown out there by the new administration funded mainly by tax hikes. This won’t work obviously. We are hearing $36 billion for climate investments, $2.1 billion for gun violence, and $831 million for the root causes of migration. The budget includes Biden’s $2.3 trillion infrastructure proposal, $1.8 trillion for education, and $1.5trillion in spending. The US will have to borrow 50 cents for every $1 they spend. We hear fancy phrases like the American Jobs Plan and the American Families Plan. The White House insists inflation will remain in check. The White House has laid out unrealistic economic growth. Biden is assuming a flood of new money with his tax hike proposals, which include raising the top income tax rate and bringing the corporate income tax rate up to 28 percent from 21 percent. He wants to bring the top individual income tax rate back up to 39.6%. There will be no great growth. It’s all PPP loans, stimulus checks, higher taxes, higher unemployment payouts, and above all debt and printed money. As the money supply continues to expand exponentially, the US dollar will buy less possibly much less in the future.

Let’s recap briefly what’s happened the last year or so. We had a pandemic that sparked trillions of dollars printed. We had high unemployment which needed trillions more printed. We have pent-up consumer demand since many have been isolated for months. The Fed has put $4 trillion on their balance sheet of bonds they have bought in the last year. Global Central Banks are all doing the same. We now have supply chain disruptions as many jobs can’t be filled. Many are making more by staying home. These are the real reasons the economy and markets haven’t completely imploded already. Commercial and residential rents have been pushed out a year in many cases. The government can’t stop. If they stop, real estate, stocks, bonds, and the economy are toast. More spending and more printed money is on the way, trillions more. As the money supply continues to expand exponentially, the US dollar will buy less possibly much less in the future.

Let’s put things in simple perspective. Exponential money printing and expanding credit means exorbitant risk. As an investor, we may have two choices here; speculation and risk or defense. In past recessions and market crashes, the Fed has relied on money printing and interest rates to spur activity. In the early 1980s, for example, the Fed’s rates dropped from 19% to 8%; in 1989, they cut rates from 10% to 3%; and during the dot-com bubble of the early 2000s, they dropped rates from 6% to 1%. In 2008, of course, the Fed responded to the Great Financial Crisis with another 5% rate cut. Tech stocks and real estate recovered because of cheap debt. Today interest rates are already low. We already have cheap debt. The only bullet in the government’s gun is to spend and use money created out of thin air. There will be a whole lot of spending and a whole lot of printing. You don’t need to be an MIT scientist to figure this one out. Sometimes the best offense is a great defense. Physical gold has always kept your buying power. Physical gold has always been a great defense preparing for an enduring financial crisis. We all know where our financial system is headed. To survive it, those preparations need to be made right now.