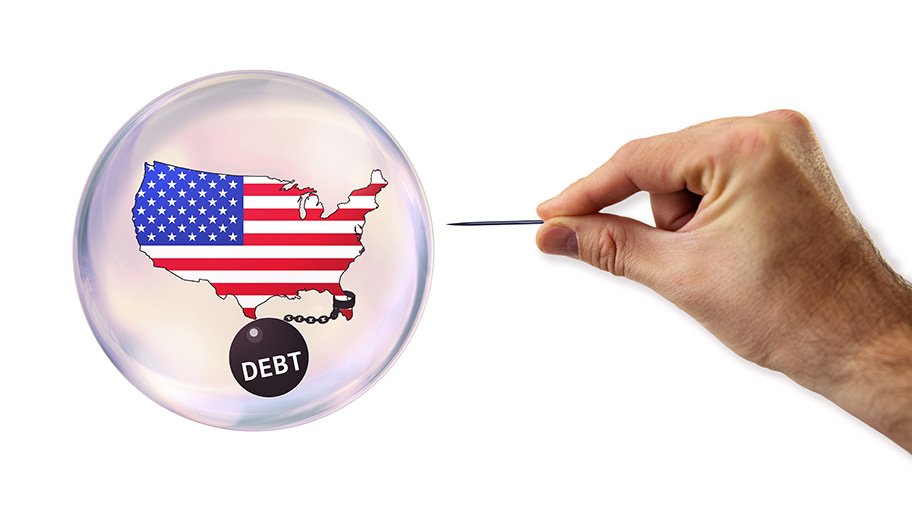 A Debt Bubble Crash Is Inevitable

It is our contention at Midas Gold Group that we have an insurmountable amount of debt out there, much of it that no one truly understands, that will eventually implode and derail our financial system. The US dollar that we have, which is based on debt and fiat, is already under attack at the gas pump, grocery store, appliance store, and restaurants. The real troubling fact is that every country has been stimulating for years, printing money hand over fist, and drowning in debt. Global debt was under $5 trillion in 1971, roughly $90 trillion in 2000, and now growing exponentially at nearly $300 trillion. This is 60 times greater than what it was fifty years ago. Speculation is running rampant as NASDAQ is up over 500% in the last decade. I read somewhere that a crypto was up 8,000,000% the last year. No one even knows what it does, I certainly have no idea. In a time of such risk, we need the right people to maneuver this huge debt ship headed toward an iceberg bigger than what the Titanic hit. We have the absolute wrong people steering this ship at exactly the wrong time. A huge debt bubble crash is inevitable.

Stocks in Asia-Pacific had a rough week last week as some very interesting headlines came over the newswire. Trading in Hong Kong-listed shares of Chinese property developer Kaisa Group and several of its units was suspended on Friday, according to exchange notices. Kaisa Group said Thursday its finance unit missed a payment on a wealth management product, according to Reuters. Kaisa is the second-largest issuer of US dollar-denominated offshore high-yield bonds among Chinese developers, according to Natixis. Evergrande ranks first. Remember the largest issuer of US dollar-denominated offshore high-yield bonds among Chinese developers Evergrande is already in hot water as being rumored to be on the brink of default. How many other large real estate developers are on the brink of insolvency globally and how many more even in China? Growing GDP by real estate development through debt is blowing up before our very eyes. It looks like these firms will be allowed to fail, or central bankers will print trillions more to just kick the can down the road again. Either way, global property developers are contributing greatly to a debt bubble crash that is inevitable.

All we hear is that inflation is transitory. So we are to believe decades of debt and recent stimulus is just going to go away by next year? Are these experts on the Kool-Aid that Jim Jones put together at the Peoples Temple in 1978? Supply chain problems will persist as labor is upside down due to unconstitutional vaccine mandates, shortages, higher wages, higher taxes, vaccine boycotts, and an administration that has zero real business expertise. I have zero confidence that global central bankers, Jerome Powell, or Janet Yellen can avoid an inevitable debt bubble crash. All of these jokers will just add to the problem and make it worse. More debt, more spending, abnormally low interest rates, more Fed balance sheet assets, is not the answer and it will not work to save our financial system. When this comes down, it will be like no other financial crisis in history. History does matter, and history says that inflation is not transitory, it will get much worse, and our dollar could be next to worthless soon. This inflation that is just starting will add to an inevitable debt bubble implosion.

This past week we had the much anticipated FOMC meeting. The talk of the market was tapering. As we all should know, the Fed has been providing $120 billion a month in treasury bonds and mortgage bonds since September of 2019. Yes folks, there was a liquidity problem even before the dreaded COVID. The Fed cut market stimulus to $105 billion a month. This will be gradually tapered more into next year. The markets are expecting the first rate hike by July of 2022. The Fed statement said that the Committee decided to begin reducing the monthly pace of its net asset purchases by $10 billion for Treasury securities and $5 billion for agency mortgage-backed securities. The pace of tapering will likely be appropriate each month, but the board is prepared to adjust the pace of purchases if warranted by changes in the economic outlook, they also said, Inflation is elevated, largely reflecting factors that are expected to be transitory. They added, Supply and demand imbalances related to the pandemic and the reopening of the economy has contributed to sizable price increases in some sectors. Jerome Powell, the Fed chair said, We need to watch and watch carefully and see if the economy is evolving consistent with our expectations and adapt policy accordingly. OK Mr. Powell, if you say so. The delusional Fed and the delusional global central bankers must have been on the Jeff Bezos Blue Origin rocket that rode in space for eleven minutes and paid the $28 million that Tom Hanks said no thank you to. The history of our central bankers for decades makes me feel that a debt bubble crash is inevitable.

Ok, we are in for quite a ride here over the next few years. It’s not too reassuring that our leaders are talking about climate control, the environment, critical race theory, and vaccine mandates as we teeter on the brink of financial collapse. It doesn’t matter that speculative stocks or risky cryptos are riding high. Many risky speculative assets were skyrocketing in 1999, only to go to zero. Yes, many of these same risky type assets will go bust very soon and many will not be able to get out. Wouldn’t it make sense to diversify while your assets are high and lock in some profits? Who cares if it was luck, great trading talent, or just a speculative mania that you capitalized on? The bottom line is to protect those assets while you can for you and your family. When the markets implode shortly, it will happen so fast that most will not be able to get out. Move an IRA, an old retirement account, or some fiat money into physical precious metals today while you still can. Gold held its value during the crash of 1929, the horrific 1987 October, and the Dotcom bust of 2000. Gold will do its job the next time as well. The time is now to get that plan together.